What is compost? In gardening terms the word compost can be confusing, as it can refer to garden compost you make yourself or for bags of peat compost you would purchase from a garden centre. In their essence they are indeed the same thing as both are made from broken down organic matter, but there are a number of important differences: 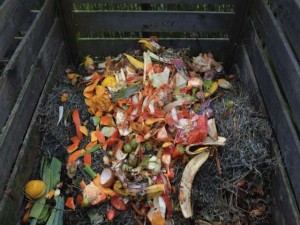 Homemade garden compost
Composting is basically a method of speeding up the decay of organic materials by providing a suitable environment for that to happen. Homemade garden compost is made over a period of 2 to 12 months, and is rich in nutrients and friendly bacteria. It’s made by adding organic compostable materials like garden and kitchen plant waste to a heap or bin, allowing it to rot down into a dark and crumbly soil like substance.

Adding homemade compost to your garden will improve soil structure by mixing organic matter through your soil. This is often referred to in the gardening world as soil amendment.

This kind of compost is extremely effective when used as a mulch. Mulch is a thick layer of material spread over soil or around flowerbeds. It’s used to prevent weeds gaining a foothold and to help the soil retain moisture. When organic material compost is used as a mulch, it feeds the soil with nutrients and allows beneficial microbes to flourish. These nutrients will in turn help feed your plants. It will also attract earthworms, who enrich the soil in a number of ways: improving drainage, soil structure, nutrient availability and soil aeration. Organic compost is sometimes colloquially referred to as ‘black gold’ because of its soil-improving qualities.

Garden compost is an environmentally friendly gardening practice as it re-cycles green waste and uses it to grow new plants; it is a home version of the same cycle which built all the soils which cover the Earth. Not only is composting cheap and renewable, it will also reduce waste in your household and encourage you to think about what you buy and the process of waste in general: how much things we buy with excessive packaging, rubbish that doesn’t break down naturally etc.

Composting at home can require a bit of upkeep and maintenance to keep it in balance. The ideal environment for the composting process requires warm temperatures, moisture and plentiful oxygen. It’s also important to have a mix of green materials (coffee grounds, food scraps, eggshells, grass clippings) and brown (woody plant material or yard waste like twigs, dry leaves and wood chips).

Opinions differ on what the ideal green to brown ratio is, but basically an excess of either can spoil the quality of your compost pile. Too much green means too much nitrogen, which can overheat the compost and kill off some of the microorganisms (as well as giving the compost an unpleasantly strong smell). Too much brown materials (or too much carbon) can slow decomposition to a crawl. If you turn the pile over occasionally it will help slow overheating, as well as providing some additional oxygen. However, turning it too often can interrupt the decomposition process - so it’s better not to have to rely on it, and aim for getting a good balance of organic materials from the start. Small amounts of material will break down faster, so it’s a good idea to chop up food scraps etc before adding them to the pile. 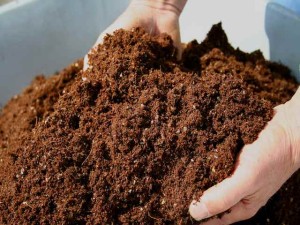 Peat Compost
Peat is partially decayed vegetation which accumulates over a period of thousands of years. While it is made up of (very old) organic matter, it holds no nutrients and is completely sterile. Peat is more commonly known as ‘turf’ in Ireland.

Peat compost is only able to support plant life when nutrients are added to it, as is the case with peat-based multipurpose composts you buy in the shop. The nutrients added to peat-based composts tend to be artificial and will only support plant growth for approximately 4 weeks. While peat compost is good for improving soil structure, it has no nutritional benefit to your plants. It doesn’t tend to make for a good mulch either, as it prevents moisture from passing to the soil and tends to blow away in windy conditions. It is still popular with gardeners because peat compost doesn’t compact and has a high water retention capacity.

The harvesting of peat is becoming increasingly frowned upon as it destroys rare and unique plant and animal habitats and is not a renewable resource. In their natural, undisturbed state, peatlands and peat bogs are vital carbon sinks (meaning they absorb more carbon than they release). Indeed they store twice as much carbon as the world’s forests. When peat bogs are drained or harvested (meaning the top layer of vegetation is loosened and removed), this releases large amounts of carbon dioxide, one of the main drivers of climate change.

The UK government is currently trying to phase out the use of peat, with a ban on the sale of peat compost to gardeners planned to come in by 2024. In Ireland meanwhile, a ban on the sale and distribution of turf is being mooted but is subject to much backlash and controversy, particularly in rural areas.

Thankfully there are increasing amounts of peat free composts available on the market. These are made from composted green wastes, as well as other waste organic materials like coconut fibre.