We are nearly at that time again when we sow some tiny seeds in compost and see them magically transform into large tomato plants bearing 15-20 kg of fruit each. The whole thing is incredible really. Whether you are sowing a humble radish or climbing vines of purple peas it is a privilege to be the instigator and caretaker of this fascinating process. This week I thought we'd cover some tips on propagating vegetable seedlings including making a good potting mix and using a heated propagator to get things going before the weather warms. What follows is the quick 1-2-3 we also have plenty more articles on which you access by clicking the link.

Why start seedlings off early? There is a bit of work to do in starting seeds off when outside temperatures are too cold for seeds to germinate so why do we do it? There are 3 main reasons. 1 - If you are growing warm climate crops like tomatoes that are originally from countries with long, hot summers you will need to get them growing early so our relatively short season is enough for their fruit to ripen. 2 - Starting temperate crops (that are suited to our climate) early allows us to get about a month ahead by cheating the last frost date in early Spring. If you were sowing directly outdoors you won't be able to start until the soil is sufficiently warm in late April / early May. With seed sown in pots or trays indoors you will be planting out 4-6 week old seedlings at this time thus giving you a head start. 3 - I always sow about a third more seedling plants than I need. This means I am only selecting the strongest plants to plant out in May and have a few left over as backup if I have some casualties from slugs, snails or bad weather. The best plants from your seedlings stock will usually romp away in the warm Spring soil and produce excellent plants.

Making a potting mix The most common reason for failure in growing early plants in pots or trays is over watering. Wherever you are growing your seedlings (greenhouse, polytunnel, porch or windowsill) there will be little evaporation from the compost as temperatures will still be low. Ideally you want to keep your compost a little on the dry side as this will encourage your plants to grow a more extensive root system as they search for water. A better root system produces a stronger plant. Using vermiculite or perlite - Vermiculite (brown) and perlite (white) are commonly added to potting compost for moisture retention and to improve drainage. Vermiculite is an expanded silicate that acts like a sponge while perlite is a crushed, silicon rich volcanic rock containing microscopic bubbles. Vermiculite is better at holding moisture but does help drainage while perlite is better for drainage but also holds some moisture. You would use one or the other depending on what you are trying to achieve but in general I would use vermiculite when starting off seedlings in trays and perlite when I am moving plants to larger pots. 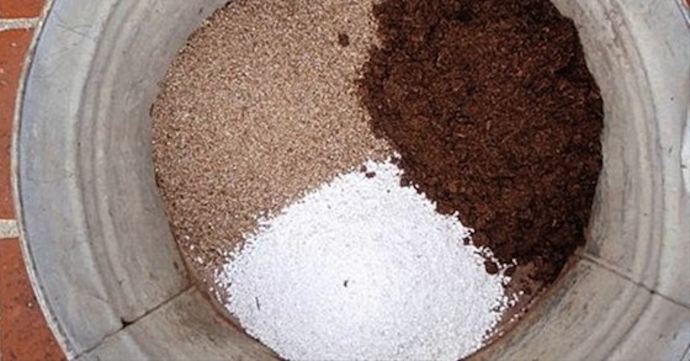 Latin scholars will already have noticed the root of vermiculite is 'vermiculare' which literally means 'to breed worms'. This is because the dry flakes expand from end to end as they take in moisture to form worm like columns. The other advantage of vermiculite's moisture holding properties is if you are applying liquid plant feed it will act as a nutrient store by holding on to the feed and preventing it washing through the potting mix. Vermiculite will hold moisture until the compost around it begins to dry out when it will release it. This handy if you can't spend as much time as you would like looking after your seedlings as you don't need to water as often. Use a 25% vermiculite, 75% compost mix. 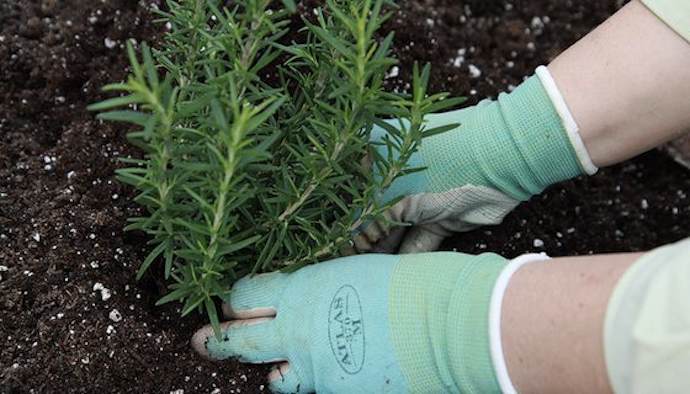 As we've said, perlite is better for improving drainage so is good to mix approx 25% in with compost in larger pots. I also find perlite a godsend when using many peat free composts (they will soon all be peat free) as those with a high proportion of coir (coconut fibre) are prone to waterlogging. I also tend to use it when starting off cucumbers or peppers which don't like damp roots or for potting Mediterranean plants like rosemary (above). 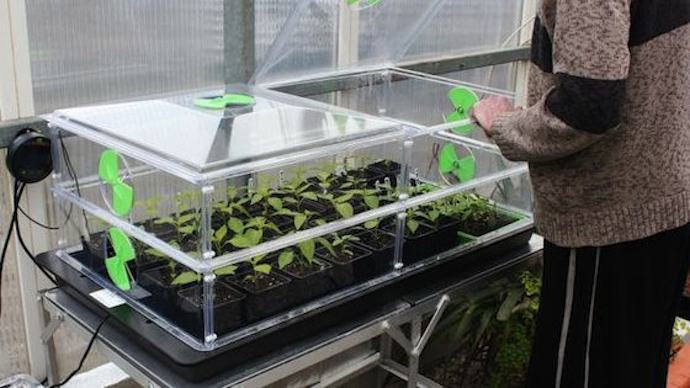 Using Propagators or Heat Benches The reason we need to use a propagator or heated bench is we need to fool the seeds into thinking it is springtime. Each seed variety will have an optimum germination temperature (the temperature that triggers the seed to start growing) but as a rule of thumb cool (temperate) climate crops will be best at 18 degrees C while warm climate crops will germinate with a compost temp of between 22 and 24 degrees C. Unquestionably the best propagator on the market is the Vitopod shown above which allows an accurate temperature to be set with the thermostat, has good ventilation and can be increased in height to accommodate taller plants. We supply the Vitopod range and can also supply adapter kits and growlights to be fitted to the top of the unit. You can view the Vitopod range by clicking the link. BTW, I got the photo from the manufacturers and while the Vitopod looks fantastic the same can't be said for the model peering into the unit. I will admit that I was never a fashion pin up but I feel I should point out that this shabbily dressed individual is not me. 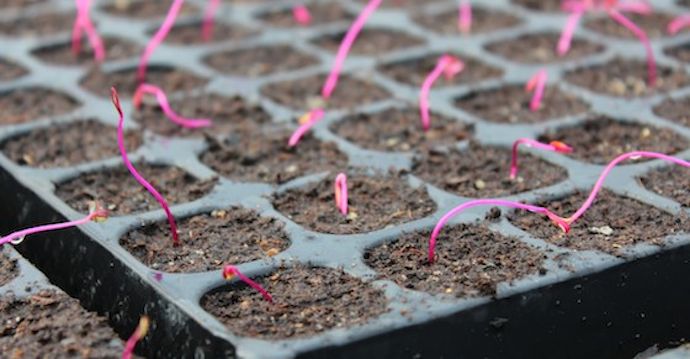 The main things you need to watch when growing in late Winter or early Spring is your heat light balance. The beetroot seedlings above might look colourful with their bright magenta stems but they have grown long and leggy due to too much heat and not enough light. With the exception of warm climate crops (tomatoes, cucumbers, peppers, aubergines and squash) it is best to take plants off the heat as soon as you see them above soil level. Soil is warmed naturally by the heat of the sun, if there is not enough sunlight but the compost is warm your seedling will grow fast to try to find the light. This fast growth results in long, leggy stems that are weak and will not produce a sturdy plant. Removing your seedlings from the propagator will lower the compost temperature which will slow growth down in balance with the available light. The other option you have to address the heat/light balance is to supply your own light using horticultural lighting. Growlights emit the same spectrum of light as sunlight (unlike domestic bulbs) and can either be placed on a propagator or suspended above your seedling area. You can view our growlight and growlight propagator sets in our propagation department by clicking the link. Heat Benches We use large heat benches at Quickcrop which are made by burying a heated cable in damp sand and placing the seedling trays on top. I have written a detailed article on how to make such a bench so won't go into it now but suffice to say they can be made to any size and are easy to construct. You won't be able to get the temperature of a bench as high as in a propagator given the surface area but my tip is to cover the bench with a couple of layers of horticultural fleece to keep the heat in. This will also help save energy as the bench won't be on all the time (provided you use a thermostat). The other tip is you need to keep the sand moist to transfer the heat, once it dries out it will not work anywhere near as well. 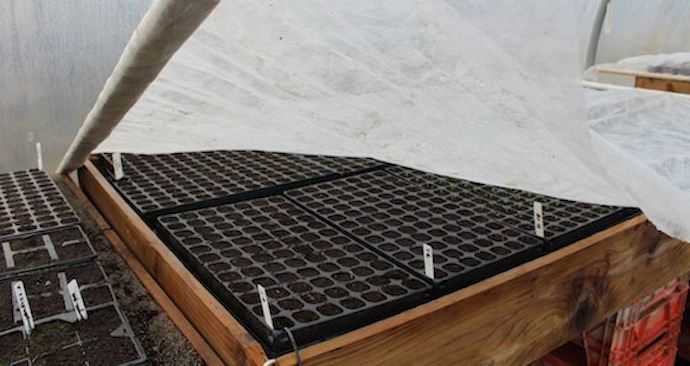 If you are germinating seedlings in an unheated greenhouse or tunnel your fleece will also be used once the plants come off the heat. It is very important to make sure your new plants don't freeze which can be avoided by covering them with fleece at night. Also, don't place seedling trays directly on the ground, keep them raised up on an old shipping pallet or similar. On sunny days you can start placing your trays outside but I would always bring them in at night especially if frost is forecast. 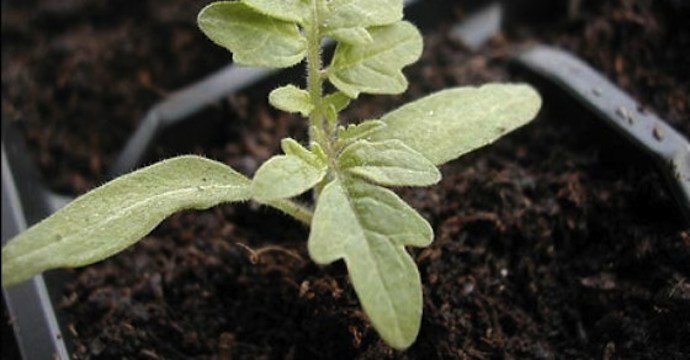 Warm climate crops like tomatoes, cucumbers and peppers will need to be kept on a low heat until late March at least depending on the weather. If you aren't using growlights I would turn the heat down to approx 10 degrees C and cover with fleece on frosty nights.

I hope you find the above helpful. Remember if you don't have the time or space to grow your own vegetable seedlings we produce the widest range available online and can deliver them to your door in our special packs. We will admit that we have a small amount of damages from time to time (it is not easy to ship plants) but if any seedlings are damaged in transit we replace straight away, no questions asked.

If you need any help or have an questions about seedling propagation please don't hesitate in dropping us a line.