If you were alive 144 million years ago, you wouldn't need to worry about providing winter food for wild birds because you would have been on the menu yourself. It might be hard to believe when you look at a rotund little robin or a ten to twelve centimetre tall goldfinch, but all birds are descended from the same group of dinosaurs (theropods) as Tyrannosaurus rex. Luckily (for us), a lot can change in 144 million years meaning our role has switched to providing bird dinners rather than being part of the dinner itself. 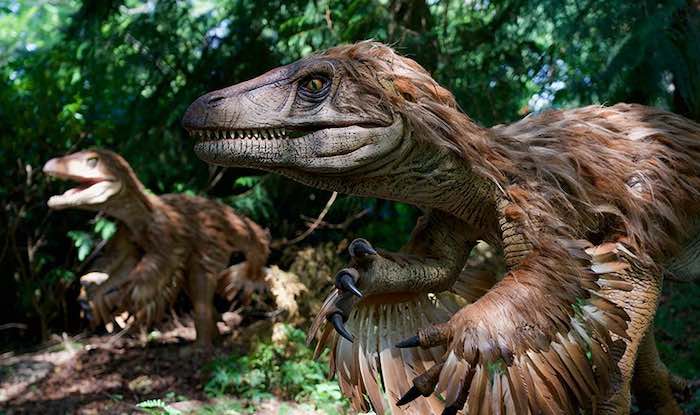 Unfortunately for wild birds, our role as bird feeders is becoming increasingly important as we continue to destroy their habitats as towns and cities expand. For many urban dwelling birds we are a vital source of food all year round but particularly in the winter months when sustenance is very scarce.

Small birds are particularly vulnerable because they have a lot of surface area relative to their mass which means they lose heat very quickly. A common small bird like the blue tit (below) will lose 20% of its body weight on a very cold night (because it burns its fat reserves to keep warm) so needs a meal as soon as day breaks to keep going. In an extended cold period a well stocked bird feeding station can be the difference between life and death so it is important to have food available first thing in the morning. 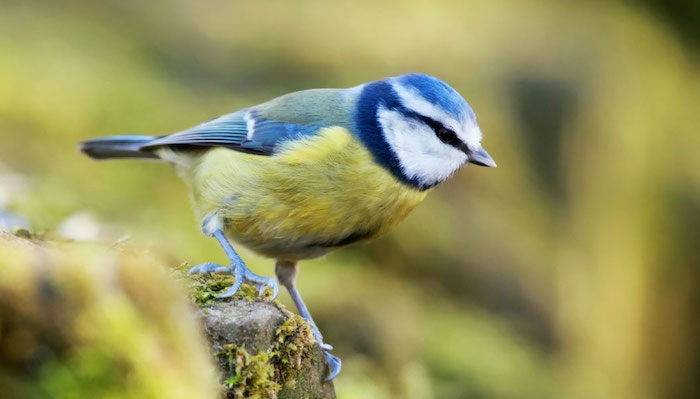 What to feed As regards what bird feed to supply, it depends on the bird but in general smaller species need more fat to keep them warm either from high fat seeds like sunflower or peanut or from animal fats. Most birdseeds contain a mix of seeds and wheat and while a low amount is OK, avoid high percentages of wheat for small birds as it is a low energy food and only beneficial for larger species like pigeons, doves or pheasants. High quantities of wheat are more common in cheaper (cheeper!) birdseeds as it is a low cost ingredient so is used to bulk them up.

Fat balls, usually made from seed mixed with suet or other solid fats, are very valuable for small birds, again for the energy storing capacity of the fat. While solid fats are good, oils are not because they cause feathers to clump together and loose their insulating properties. You may have noticed that birds sometimes look more plump in winter than summer; this isn't from weight gain but because they puff up their downy feathers (like a feather duvet) to trap air and keep heat in. Naturally, oil compromised feathers will also effect flight so will make birds more vulnerable to predators. 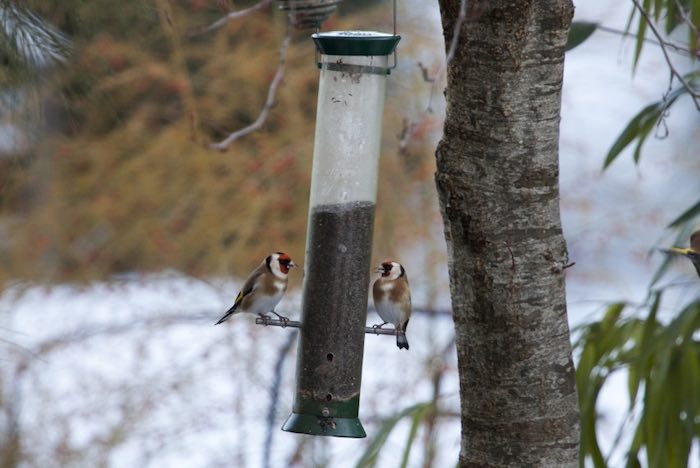 Small birds like finches (above) will also appreciate small seeds, particularly the small black seed of the Guizotia flower (known as Nyjer or Niger) seed). The seeds are so small that a special feeder with smaller gauge feeding holes (also above) is most efficient, otherwise a significant proportion of seed can be wasted.

Bread There is a certain amount of debate about whether bread should be fed to birds, particularly ducks or swans in city parks as it is not a high value food, especially processed white bread (which isn't good for us either). I think the reasonable answer is that bread is fine in small quantities but should be a very small part of a bird's diet. If you are feeding bread scraps, a healthy wholebread is obviously better for you and the birds.

Interestingly, The Queen's Swan Marker (as you may know The Queen owns all the swans in England) has come out to say that due to the 'Ban the Bread' campaign in the UK, some city swans and cygnets are not reaching their optimum weight. I guess we need to remember that birds that share our urban spaces are domesticated to a certain extent (because they rely on us for some of their food) so we need to keep feeding them. If you want to feed ducks and swans, wheat, barley or linseed will be better than bread though, as above, small amounts won't do any harm. 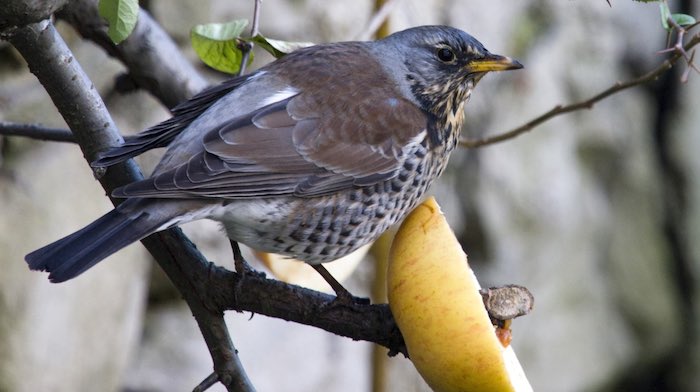 Fruit Large birds like the Fieldfare below (a large thrush) or blackbirds enjoy fruit, especially apples which are best cut in half and speared on a branch. They are not such attractive targets when whole for some reason so cutting in half and presenting the cut half outwards will ensure they are spotted and eaten.

Of course hedgerow fruit forms a significant part of many bird's diets in Autumn and early winter so planting of 'edible' hedge species in your garden like hawthorn (haws), blackthorn (sloes), hazel (nut), Elder (berries), Dog rose (hips) or crabapple (no explanation required) will provide a perfect meal for many species. If you are interested in planting your own edible hedge we are supplying a bare root plant pack including all of the above which can be viewed by clicking the blue button below. 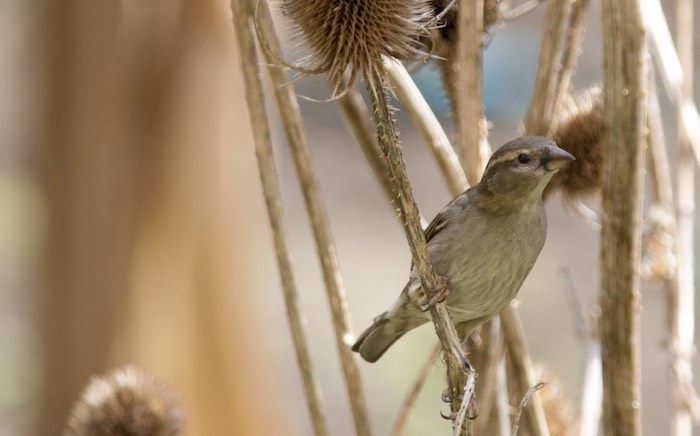 Speaking of hedges..... Once you have established what to feed your wild bird friends, it is also a good idea to think about where you feed them, in particular the location for your feeding station. Hedges provide good cover for birds but can also be used as an ambush hideout for cats so avoid placing a bird table near a hedge. The ideal situation is a hedge approximately 2 metres from a bird table so birds can make quick forays to the food and return to safety between snacks

Birds also like vantage points so they can make a risk assessment for any feeding sorties so tall hedging or trees are just as important as the food as they keep the diners happy and secure. Territorial birds like robins like to defend their patch from a height, again the point is that good habitat keeps birds comfortable and makes them more likely to feed. 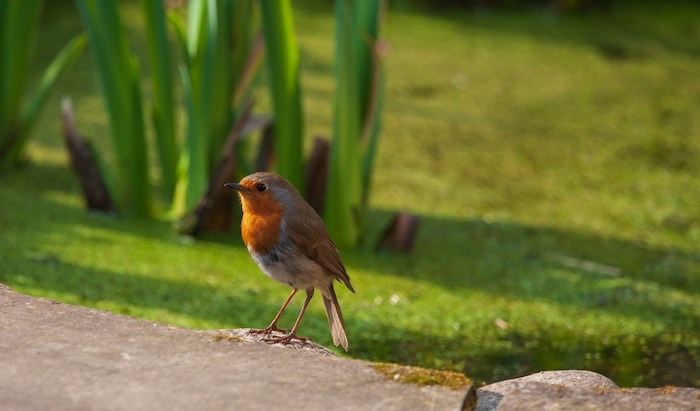 Robin by the pond

Types of feeding station When choosing a bird feeding station we need to be aware that different birds like to feed in different ways. Robins, dunnocks, blackbirds or song thrushes naturally rummage around on the ground for seeds or grubs so will prefer to feed from a standing position on a platform or tray feeder. A tray feeder tends to be busier when on the ground but will leave diners more at risk from cats so are more often placed at a height.

Seed feeders Seed feeders are available in many different designs, the most common and probably the most effective are transparent tubes with feeding holes and perching points along their length. As with the nyjer feeder mentioned earlier, the feeding holes may be a different guage depending on the size of the feed used. 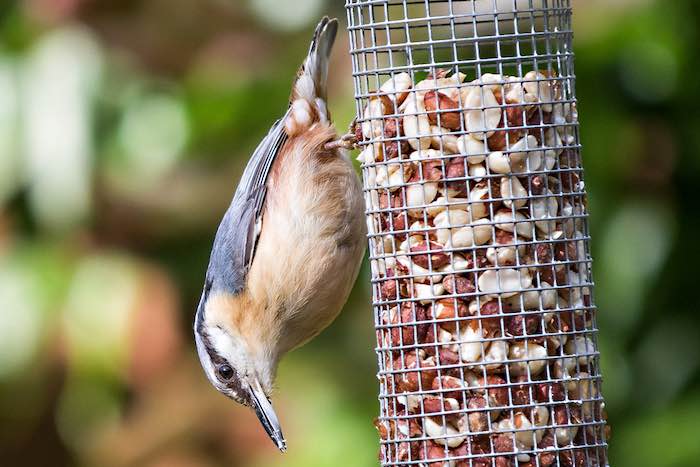 Peanut feeders Peanuts are a good choice for blue tits, great tits, woodpeckers, jays and doves but please use peanuts intended for use as birdseed rather than salted nuts. Nut feeders are mesh tubes designed to hold the nuts but they also prevent nuts being eaten whole which can result in choking, particularly for fledglings.

Suet ball feeder While suet balls can be placed in the open, a mesh holder is better as the mesh provides a perch for feeding. The balls are often sold in mesh bags which can be hung from trees but it is better to remove the bag as birds can become trapped in the netting or choke on fine strands when feeding. 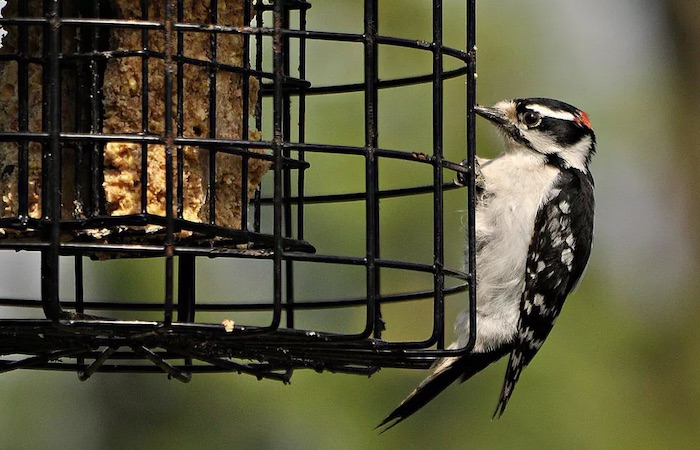 You may also find that starlings can demolish fat balls in no time meaning smaller birds don't get a chance to feed. To avoid this some designs of suet feeder also include an outer mesh (as above) which prevents the larger starling entering but allows smaller birds in.

Due to the fact that suet is an animal fat, feeders should be cleaned when they are replenished to prevent remnants becoming rancid and spreading disease. For the same reason it is advisable to clean any bird feeder in hot soapy water from time to time. 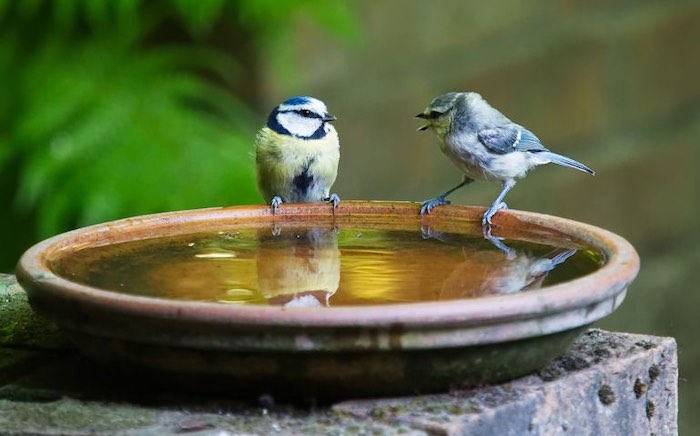 Birds like a drink Like many of us, birds like a drink so unless there are areas that catch and hold water in your garden (I think they call them puddles), it is a good idea to provide a shallow bowl of water for drinking or bathing. The photo above shows an adult Blue Tit bringing her young fledgling for his first drink, if my experience with my own progeny is anything to go by, I'd say she is getting dog's abuse. 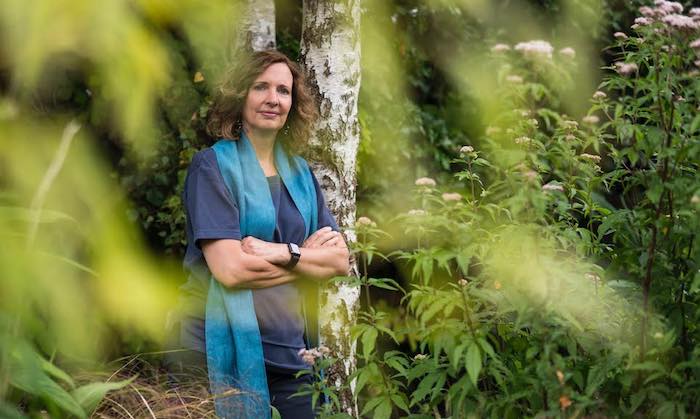 Thank you That's about it from me today but before I go I would like to thank the fabulous Jane Powers for help with this article and for allowing me to use some of her bird photos. Her images include the header images, finches using a nyjer feeder, fieldfare with apple, female sparrow on teasel and robin by the pond.

I was inspired to write this piece by Jane's most recent book 'An Irish Nature Year' (pictured below). As you would expect for a wildlife book, it is literally full of life but it is Jane Powers' considerable skill as a storyteller which makes the daily entries shine. The book is a lovingly compiled collection of mini essays which manage the rare feat of being interesting, informative and amusing all at the same time. If you're thinking about your Christmas shopping list either for yourself or someone else, I can't recommend it highly enough.

I will leave you with this Saturday's entry from 'An Irish Nature Year' which, as luck would have it, features our friend the robin.

See you next week! Andrew 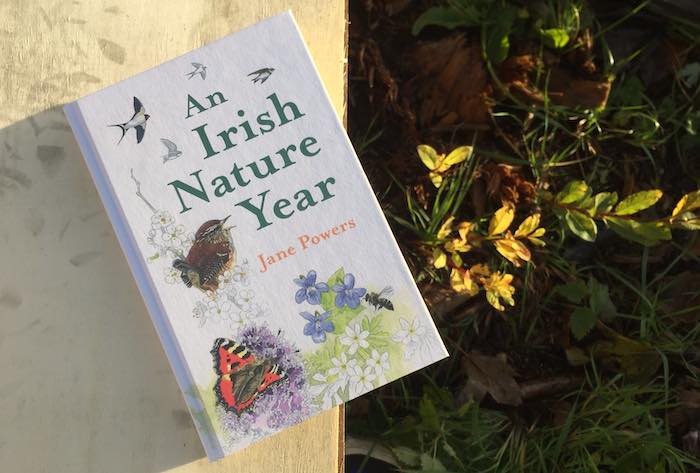 November 13th The robin is singing, not as noisily as in spring and summer, but the song is just as mellifluous. The rippling, musical warble is interspersed with rapid-fire tick-tick-tick-tick warning calls. Unusually, both sexes sing, and they do so to broadcast their individual territories. Towards the end of December, the females enter the domains of prospective mates, and after some half-hearted male posturing, will be accepted. Before cold nights, robins put on more weight, as a buffer against the low temperatures. Research has shown that on mornings when they have retained more body mass overnight, they sing more at dawn. They don't need to feed immediately, and their fat stores provide enough energy for a proprietorial singing session. In urban areas, robins can sometimes be heard singing at night. Some researchers say they are beguiled by city lights, while others posit that daytime traffic and other noises cause too much interference, so robins choose the relative quiet of night instead.