Everyone who has grown potatoes will have heard of potato blight, it's the most serious disease affecting potatoes and one which is almost impossible not to get. The disease is thought to have originated in South America (where the potatoes themselves originally hailed from) and brought to Europe in infected 'guano' or fertilizer. Whatever way it arrived here it's here to stay and unfortunately for growers has developed more virulent and destructive strains.

There are ways of avoiding blight but for domestic growers there is no way of treating the disease once it has made an appearance in your crop. Growing potatoes and dealing with blight is all about trying to work around the fact that sooner or later you will get it so it's all about avoidance and minimising the effects once the disease hits.

If you haven't grown potatoes before don't let this put you off, gardeners everywhere grow potatoes year after year and enjoy great crops of healthy and tasty potatoes. This article is intended to make sure you enter the battlefield fully prepared not only to recognise the enemy but to know how to tackle it when it appears.

What is potato blight? Potato blight or late blight disease is caused by a fungus-like organism Phytophthora Infestans. It spreads rapidly in warm humid weather in the foliage of potatoes and outdoor tomatoes causing collapse and decay of the foliage and infection of the potatoes or tomatoes. Late blight disease can also infect potato tubers causing rapid tuber rot making to unfit for storage or consumption.

How does potato blight spread? Blight spores are produced on infected leaves and are dispersed by the wind to neighbouring plants and gardens. Blight spores can travel long distances and while isolated gardens may be less at risk than more concentrated city gardens it is inevitable you will get blight at some stage. 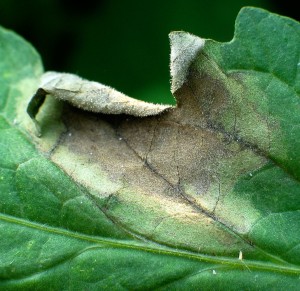 How does potato blight infect my potato crop? When a blight spore lands on a wet leaf it sends out zoospores which swim over the surface of the leaf where they settle and grow into the tissues of the potato leaf. If conditions are warm and humid a dark lesion will form after 2-3 days with a white fuzzy mould under the leaf. The white fuzz consists of tiny stalks containing new spores which detach and spread to other plants to start a new infection.

During wet weather light spores are washed off leaves and down stems into the soil where they can infect the developing tubers.

How do I recognise potato blight? The first sign of infection is likely to be brown freckles on the surface of the leaf which will spread to form larger dark brown patches. The dark brown spots are usually on the margins of the leaves and can be surrounded by a light green halo. These dark spots or 'lesions' will quickly spread in humid conditions to cover the whole leaf which will soon die off.

Blight seems to be more of a problem recently, is this true? Unfortunately yes. There are varieties which previously had good resistance to blight which are now coming under attack. This is because of new strains of the disease most notably Blue 13 and Pink 6 which are particularly damaging to potato crops. New varieties are being developed with resistance to these strains like the Sarpo varieties mentioned later.

How do I avoid potato blight? There are a number of things you can do to reduce the instance of potato blight from the type and variety of potato you grow to good garden hygiene and finally damage limitation when it does hit. We'll take them in order so here we go: 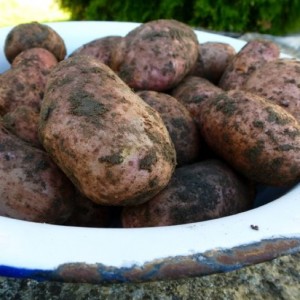 The appearance of stronger strains of blight like the aforementioned Blue 13 makes this process an ever shifting battlefield. The current leaders in the UK are the Sarpo Varieties (Sarpo Mira, Axona, Una and Shona) with Irish varieties like Setanta, Red Cara and Avondale also showing good resistance.

Garden Hygeine Make sure all potatoes are removed from the soil at the end of the season, this can be difficult as some very small tubers can be difficult to find. Avoid dumping infected potatoes near your garden. Potatoes from the previous season growing on a compost heap are a common source of infection in many gardens so try to keep a potato free heap. Blighted potatoes can be buried in a hole at least 12 inched deep, crush the potatoes completely before burying.

Blighted foliage should not be left around the garden, it can be composted in a good active heap. Foliage on an open compost heap should be buried inside the heap as the spores will remain active until the green material dies. Obviously a closed plastic bin is fine as the material is kept enclosed anyway.

If you don't have a working compost pile they can be buried in a trench of soil, again at least 12 inches deep..

How do I control potato blight?

Spraying with Bordeaux Mixture Bordeaux Mixture which consists of a copper formulation has been traditionally used to control potato blight. It works by creating a temporary film on the leaves which prevents the blight from taking hold, it is preventative rather than curative. The plants need to be sprayed repeatedly, especially after rain meaning many treatments in damp climates like ours. The issue here is copper will build up in your soil over time and is harmful to one of our best friends in the garden - the earthworm. 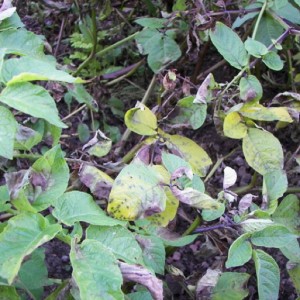 If over 10% of the foliage is affected cut off all growth at soil level, this will stop any growth but should prevent the tubers in the ground from infection. Wait for 2 or 3 weeks before digging the crop which allows a thicker skin to build up and any spores left in the soil will have died preventing infection when your crop is lifted. Harvesting in dry weather is also recommended as it lowers the risk of infection.

Crop Rotation This should be standard practice anyway but growing your potatoes in a different part of the garden the following year will help reduce the chance of disease spreading from the previous crop.