Growing your own fruit has to be the easiest, most satisfying and most joyous gardening pursuit. Yes, I am delighted when I fork out some nice straight carrots or creamy skinned potatoes but do they compare with a mouthful of zesty raspberries picked and eaten straight from the cane? I don't think so. Summer and Autumn in the garden is made much more fun with gooseberries, raspberries, plums, apples and and all sorts of other stuff dotted around the place and available for a quick snack. Most fruit varieties were originally woodland plants so will happily produce in partial shade; your fruit does not need prime garden real estate so can make excellent use of marginal areas. 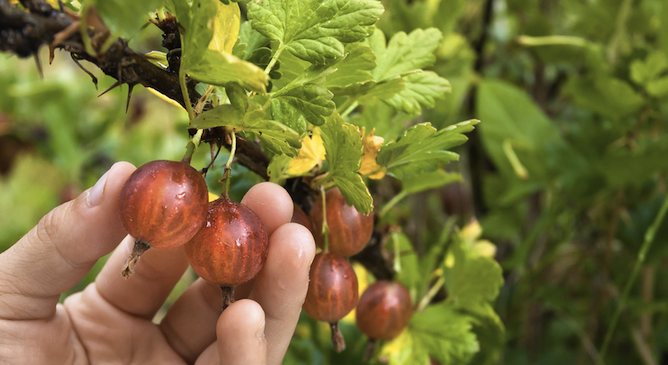 Fruit is also very easy to grow and requires far less of your time and resources than growing vegetables. Most fruit only needs to be planted once and will provide delicious harvests for over 10 years with some simple pruning and a Spring feed. Unlike many vegetable crops which we are trying to prevent from bolting or going to seed your fruit is allowed to run full cycle so only needs a little helping hand to get there. Bare root or pot grown fruit? October/November (if it's not too cold) is the time to plant bare root fruit because it is in it's dormant state. Bare root plants are field grown plants which have been dug in October and, as long as their roots remain moist, can be packed and shipped safely. Bare root plants are much cheaper than the pot grown versions because you are not paying for the pot or the compost and, because they are less bulky, are cheaper to ship. 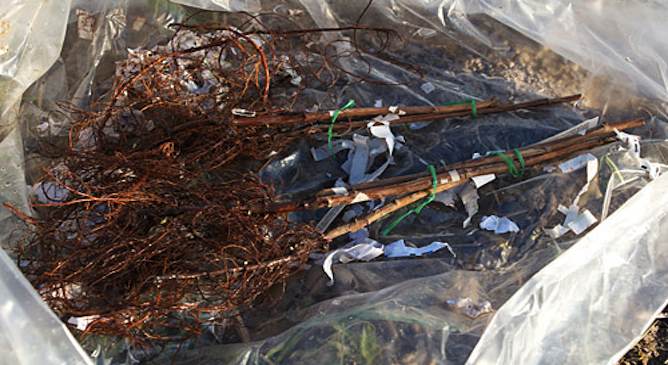 The other reason I prefer bare root plants is they usually have a larger, better developed root system than potted plants. This is important as roots which have started to spiral in a pot tend to continue this habit when planted out. This is more of an issue with larger tree fruit like apples, pears and plums and is a common reason for poor yields even in mature trees. Trees with constricted root systems tend to do well in the Spring at the flowering and fruit setting stage but fruits will fail to develop or drop off later in the season. A tree needs a lot of water to swell and ripen the fruit at a time when soil moisture is seasonally low; a constricted root system drawing from a relatively small area simply can't keep up. Planting Bare Root Fruit I think one of the reasons people don't plant as much fruit as you would expect is confusion on how to plant and concern over pruning later on. I have more detailed articles on raspberries, gooseberries, blueberries and currants which you can read by clicking the links but here's the 1,2,3 on planting most varieties of fruit. 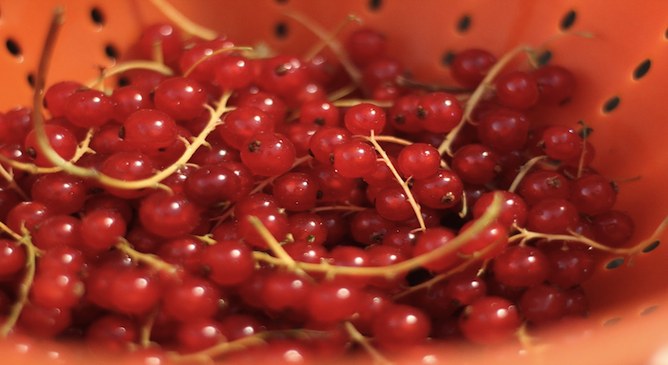 Soft Fruit - Soft fruit generally applies to any fruit that doesn't grow into a tree, the fruit is usually soft skinned and juicy. Apart from strawberries most soft fruit will be borne on woody stems, either canes, trailing brambles or bushes. Most soft fruit with the exception of blueberries have more or less the same soil requirements and will like a rich and fertile soil. It is usually recommended to prepare your soil a month before planting but I have never been that organised. Bear in mind that your fruit will be in the same place for at least 10 years so good soil preparation is important. 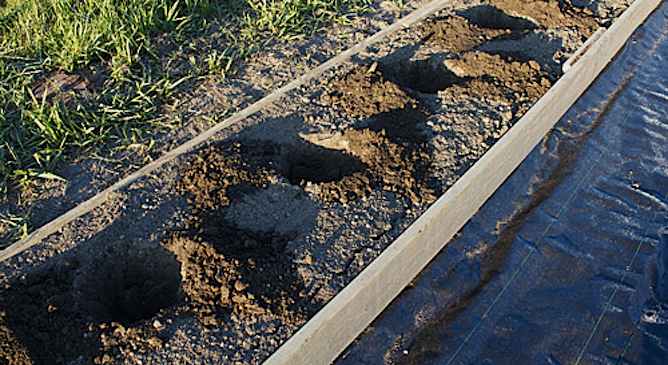 Remove any deep rooted weeds and feed up with plenty of well rotted manure or garden compost. My soil is a heavy clay so I break up the soil down to 4 or 5 inches over the whole bed and work the compost and manure in. Avoid only feeding the immediate area around the planting hole as the roots will be reluctant to leave this small, fertile patch. You want to encourage roots to spread over a wide area which will increase the water and nutrient uptake of the plant. Plant all fruit at the same depth as it was originally, if the fruit is potted that is the level of the compost in the pot, if a bare root pant you will see a distinct change of colour from light to dark on the stem. If your fruit is pot grown gently tease the roots out of their pot shape and plant with them facing away from the stem encouraging them to explore the surrounding soil. Bare roots are planted in the same way, in both cases dig a hole large enough for the roots to be comfortably spread out. 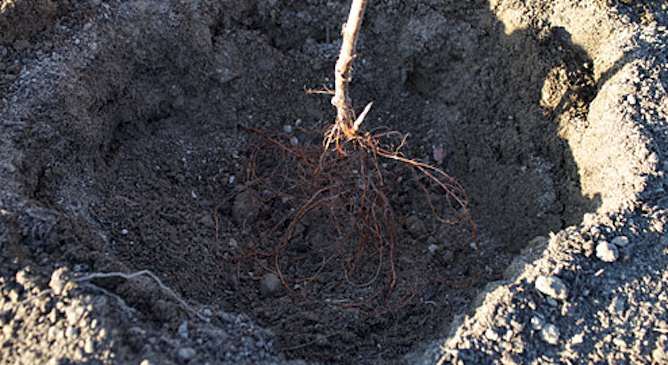 When back filling the planting hole I use compost only in the area immediately around the root. Give the stem a gentle shake up and down to settle the compost around the roots and fill any large air pockets. I fill the rest of the hole with 60/40 mix of soil and compost with a handful of bonemeal mixed in (bonemeal is naturally high in phosphorus so good for healthy root development). Avoid the temptation to mix in more manure or other plant feed into the filling mix or the roots won't branch out for the reason mentioned above. Half fill the hole and firm either with the edge of a rake or gentle treading. On all accounts avoid over compacting the soil by treading heavily. Fill the remainder of the hole using the same method. In dry weather it is handy to make a raised ring of soil about around the plant which keeps water above the root zone after watering. 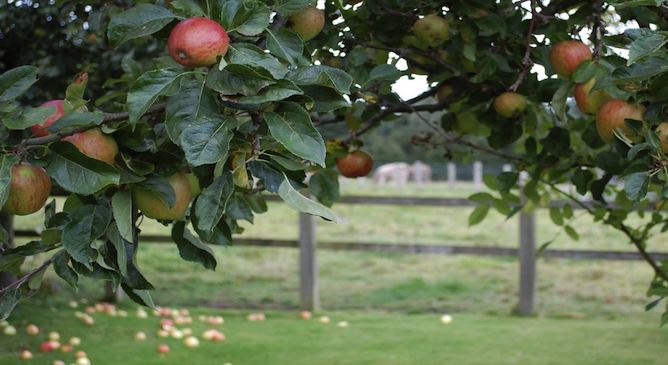 Tree Fruit - Tree fruit is planted with much the same considerations as soft fruit but with trees care when planting is even more important. Poor planting will effect the tree for its lifetime and can be responsible for poor (or non existent) fruiting, slow growth and even the death of the tree. A badly planted tree can appear to flourish and even fruit well for the first few years but once the demands of the tree outweigh the capacity of the roots it will go into decline. The planting hole - Few people make a hole either deep enough of wide enough for planting a tree. With a container grown tree the hole should be 3 times the width of the tree and a little deeper than the depth of the pot. With a bare root tree the diameter of the hole should just over twice the length of the longest root. It is also a good idea to loosen the soil in the bottom and sides of the hole with a fork to enable roots to penetrate easier. Loosening the soil is especially relevant if your garden is heavy clay as roots will grow around the sides of a smooth clay hole in the same way they do around a pot. 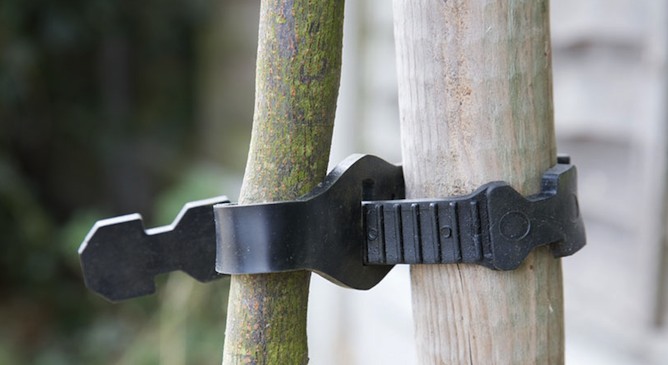 Unless you have a sheltered garden use a stake to support the newly planted tree. The stake should be driven in 30cm below the bottom of the planting hole with the top just below the level of the first set of branches. It is better to put the stake in before the tree to avoid forcing it through newly planted roots. Hammering a stake with a sledgehammer can cause the top to split if you don't hit it square on every time (you won't); a good remedy is to screw a metal jam jar lid on the top of the stake to protect it while you hammer. All trees will benefit from a temporary stake which can be removed after a year or two. To remove the stake cut at soil level rather than trying to pull it out. Any trees on dwarf rootstocks or those trained as cordons will need to be supported permanently. For bare root and container grown trees soak the roots in a wheelbarrow for 2-3 hours before planting. Soaking will also help you tease the roots of the container grown tree out of the pot shape, if you do this with the root ball under water it makes it easier. 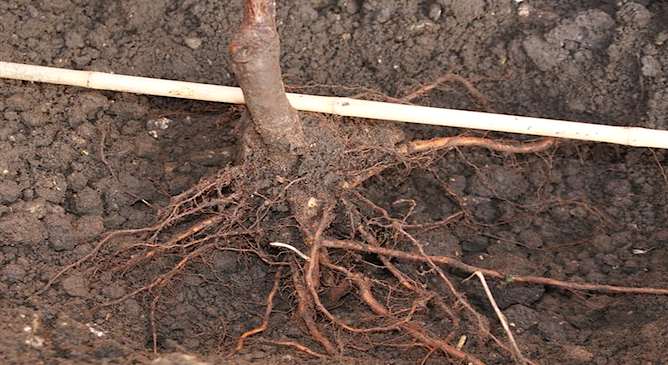 As with soft fruit, trees should be planted at the original soil mark. It can be tricky to line this up by eye but if you lay a bamboo cane across the hole you will find it easier to find the correct level. Fill around the roots and using the same method and planting mix as used for soft fruit above. Try to arrange roots in the planting hole in the same direction and level that they were originally. Remember that the majority of tree roots grow just under the surface of the soil (where the oxygen is) so avoid pushing roots deeper into the hole than their natural level. Provided roots have been soaked beforehand it is not necessary to water bare root plants heavily after firming in. Too much water will force oxygen out and make it more difficult for the tree to re-root. As bare root trees are planted in late Autumn/Winter moisture levels in the soil should be sufficient. With Summer planted container grown trees it is important to water regularly until they become established. Aftercare - Keep the area around the tree weed free for best results. Using a mulch is best, especially if you don't have very good garden soil as the mulch is also feeding the area around the roots. Trials have shown that the wider you mulch the better your tree will do. I try to keep a circle with a diameter of 1 meter around the tree weed free but you can go wider if you prefer. You are better using a shallow mulch and hoeing to keep weeds at bay rather than a deep mulch which will leave the roots unnaturally deep and cool. 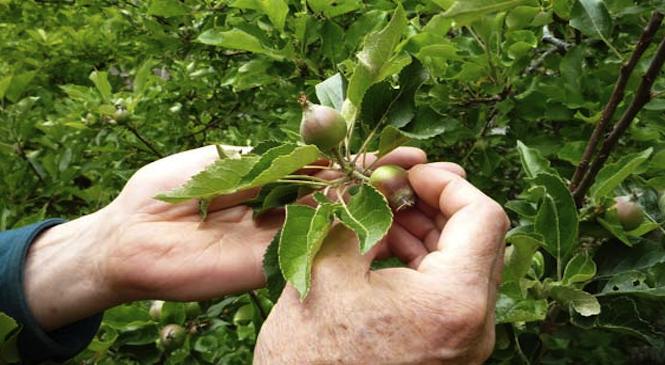 Deflowering - Remove the flowers (or immature fruit if you didn't get the flowers) in the first year to prevent the tree from producing fruit will increase future yields significantly. Fruiting puts a lot of stress on a young tree especially when it is trying to recover from the inevitable root loss caused by transplanting. Preventing the tree from fruiting allows it to redress the root/canopy balance and lays the foundations for a stronger and more productive tree. You can, just for fun, leave one fruit to develop to see what it tastes like.