Pollinating Sweetcorn As you may know from previous mails I am growing sweetcorn in the polytunnel this year as part of our video project. I thought you might like to see a couple of photos as the corn is now at the pollination stage where there is a bit of action. You can see the plants are very tall, much bigger than anything I have ever grown outside, the variety is 'Swift F1', a quick maturing sweetcorn that is usually ready 90 days from sowing. If you are growing outside and your corn isn't that size yet, don't be disheartened as polytunnel crops can be 3 weeks to a month ahead. The plumes at the top of the stalks are male flowers which rain down pollen on the female flowers below when the plants are disturbed by the wind. Obviously there is no wind in the tunnel so I have to give the plants a shake every now and then to make sure even pollination takes place. 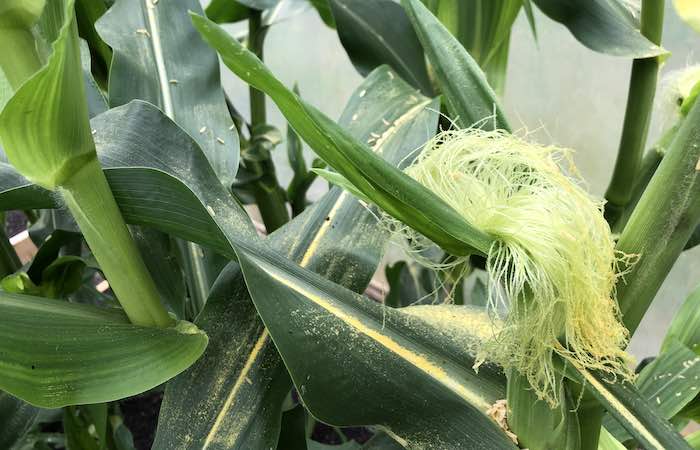 The image above shows the silks of the female flower which receive the pollen, they are sticky threads which are individually linked to a potential sweetcorn kernel so each thread needs to receive a dusting. All the yellow stuff on the leaves is pollen, there is no wind in the tunnel to blow it away so you can see just how much each plant produces. 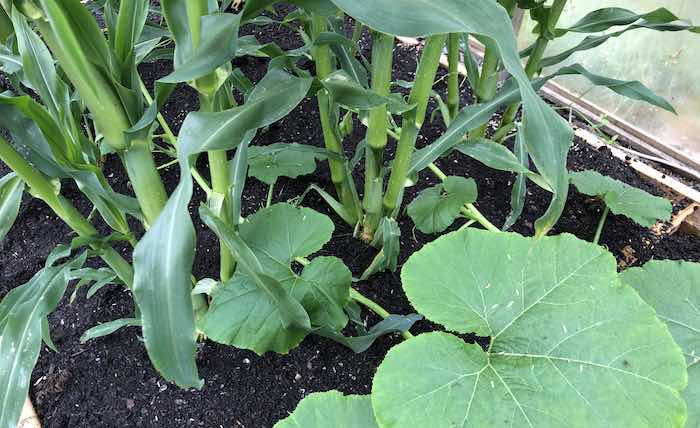 This picture shows squash 'Crown Prince' which is starting to grow through the sweetcorn, an old practice originally used by native American's known as 'the two sisters'. The idea is that the space greedy squash can co-exist with sweetcorn, the squash can use the ground while the sweetcorn crops higher up on its lofty stalks. The large squash leaves also provide shade which helps conserve moisture in the soil, a plus because sweetcorn grows fast and needs water, especially when the silks go brown indicating that the cobs are ripening. You can't tell from the photo but I have also added a fresh layer of garden compost around the sweetcorn plants to give them a boost. Each plant usually produces 2 cobs, one smaller than the other and the extra feed at this stage helps ensure the second, smaller cob, grows to a worthwhile size. 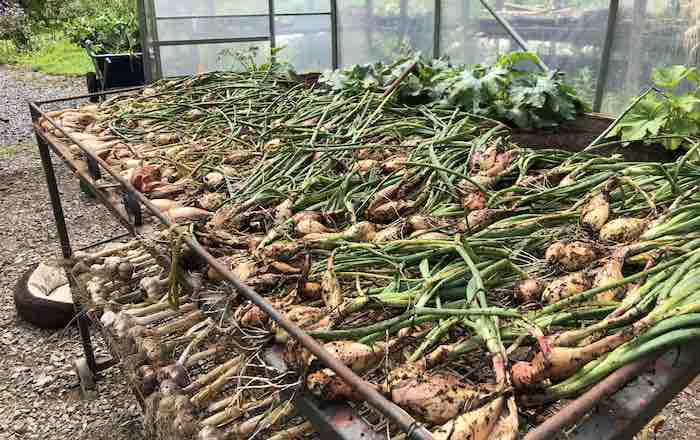 Drying shallots As you probably know, onions, shallots or garlic are left in the sun for a week to 10 days after harvesting in order to begin their drying process. Unfortunately, for many of us, this is not a very successful process if there is more rain than sun so they may need to be dried undercover. I have plenty of room for this in the polytunnel, above you can see shallots on the top tier of the drying rack and garlic below, but I should point out one needs to be careful on hot, sunny days as high temperatures can partially cook your produce. By chance, my drying rack is on wheels (I can't remember where it came from) so I can wheel it out on sunny days and back in if rain is forecast. After the initial drying period crops can either be plaited or tied in bunches and are better stored in a well ventilated space away from direct sunlight. 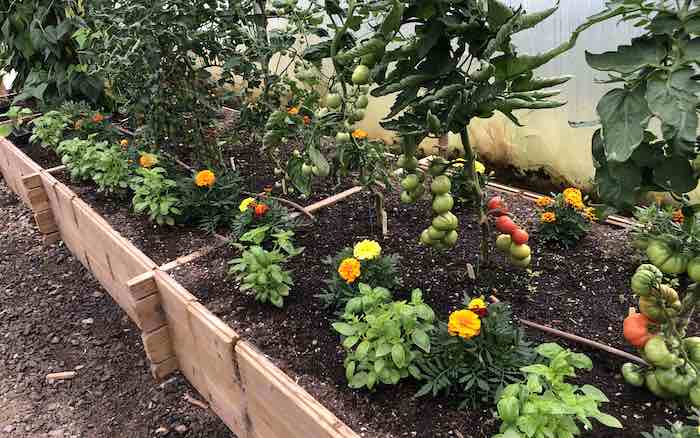 Marigolds and tomatoes I am often asked to write an article about companion planting but I haven't to date, mostly because I haven't had great success with any of the commonly recommended partnerships so I can't recommend them. I do, however, grow marigolds with tomatoes as they are said to exude a substance called limonene that deters aphids. I don't know if this is true but I have got so used to growing them that I think tomatoes look naked without them and sow them by habit every year. The plants between the marigolds are basil which also pair well with tomatoes both in the ground and in the kitchen. You can also see that I have removed a number of tiers of lower leaves from my tomatoes already to improve airflow and to help the fruit to ripen. Just remember that any old, dying or tightly curled leaves are adding very little to the plant in terms of photosynthesis; it is the higher tiers that are doing all the work so, in my opinion, you are better off removing them. 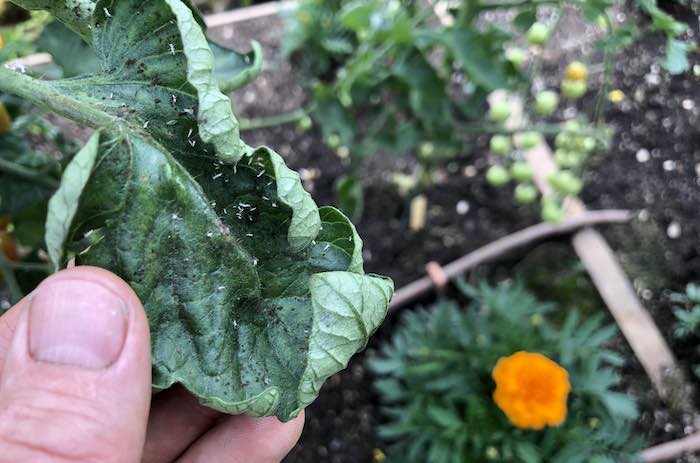 Whitefly on tomatoes So, you know how marigolds deter aphids from tomatoes? Well, here are some aphids on my tomatoes (with a marigold in the background). The aphid in question is whitefly which I rarely have trouble with but, if reports are top be believed, are very common this year. If kept under control and plants are growing healthily, whitefly is not a big deal and can be easily controlled with a strong blast of water in mild cases or with an organic spray (I have included two in the products below) in a more severe attack. Pests, including aphids, will always be more of a problem if plants aren't growing well so attend to your soil nutrition first and any pest issues should be minimal. 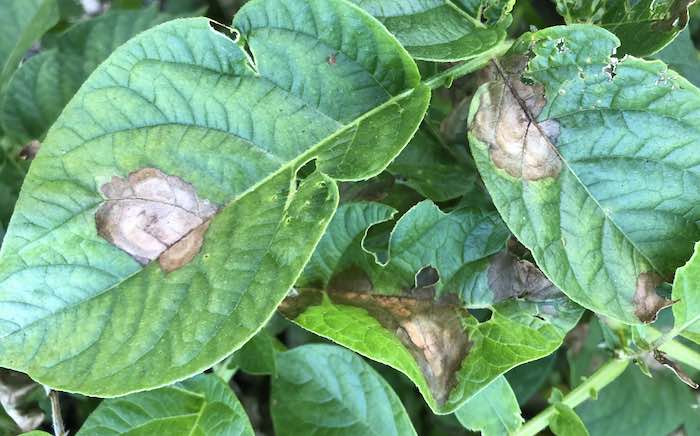 Late Blight We are well into late blight season now, with almost perfect blight conditions for me over the last few days, warm and wet. Predictably I am seeing blight starting on early potatoes which are particularly susceptible, none so far on maincrop blight resistant varieties but I there will be if I'm not careful. If you see the tell tale signs of late blight (on my potatoes above), make sure to remove and dispose of any infected leaves to slow the spread through the crop, it will make a very significant difference. Once you see blight appear I would check every two days and remove as necessary. 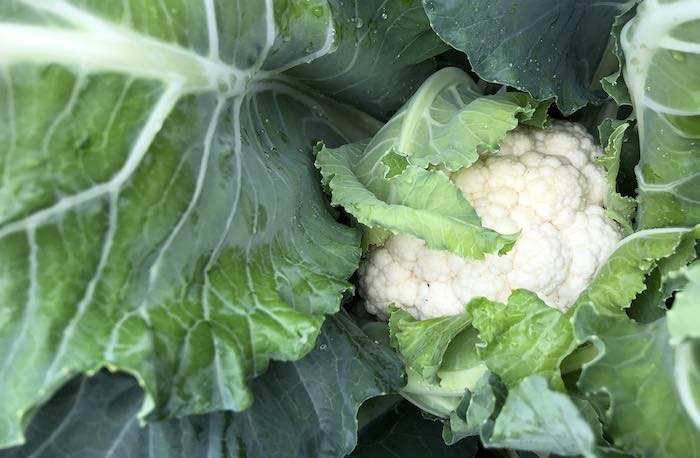 Harvesting Cauliflower Cauliflower is a tricky vegetable to grow well so if you have managed to grow a nice head, you can give yourself a pat on the back. I can't remember whether we covered this already but cauliflower can be sown for harvests at different times of the year depending on which variety you choose. 'Aalsmeer', for example is sown in June and forms heads the following April, Summer 'Aviron F1' matures in July while bright green 'Romaesco' matures in Autumn. The point I am making here is that while spring and Autumn maturing cauliflower can stand for longer (not deteriorate on the plant when ready), summer cauliflower goes south very quickly so needs to be picked as soon as it has formed a nice curd. The reason is the plants are growing, and maturing, quickly in warm July weather while there are also plenty of pests about who want to eat them. In April or October things move at a slower pace with less hungry mouths looking for a meal. Basically, if you grow a good head of summer cauliflower pick it and show it off quick, it won't be around for long. 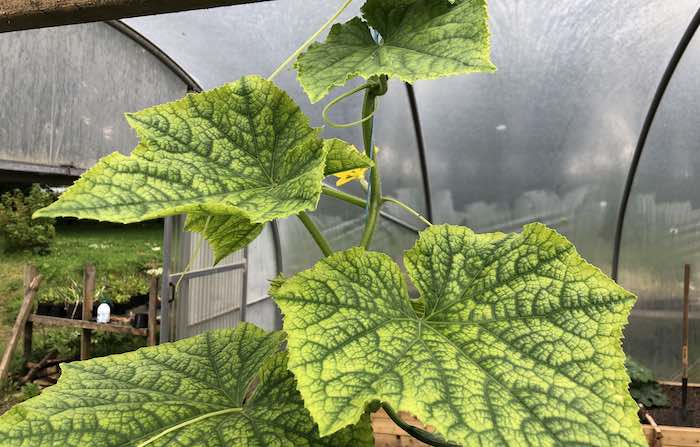 Cucumber Nutrient Deficiency Problem Last week we looked at suspected manganese deficiency in my cucumber plants which I figured was likely caused by watering with hard or alkaline (high pH) water. The action I took was to water with a dilute vinegar solution (4 tablespoons to 10 litres of water) which has made a difference as you can see above and below. I only treated one of my two cucumbers as it was possible that the vinegar would kill the plant (it is the active ingredient in most organic weedkillers) but thankfully the experiment went well. You can see the stark difference between chlorotic leaf cells and green leaf veins above and the more calm looking leaves below as things get back into balance and the chlorophyll returns. 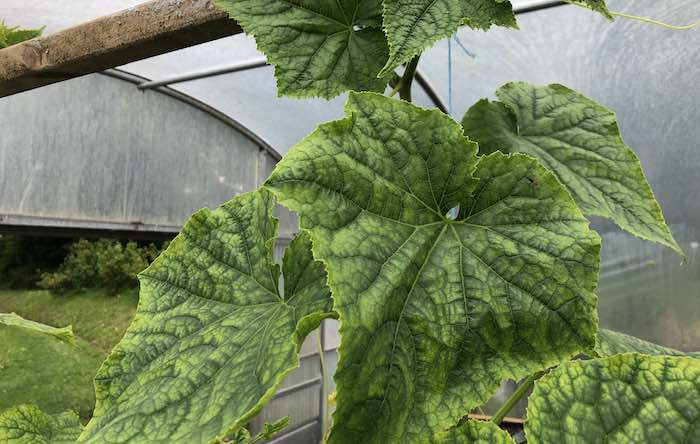 I had the same issue on bush tomatoes growing in a tub where I tried using Hydrangea blueing agent (aluminium sulphate) as it is acidic and this also worked. You are probably aware that Hydrangeas will only flower blue or purple on acidic soil, otherwise they go pink. If you are growing on neutral or alkaline soil you can turn them blue with aluminium sulphate as it makes the soil more acidic. Anyway, it worked on the tomatoes. As a footnote, because her book 'Grow Your Own Vegetables' is the first place I go when I am in a jam, I thought I would be cheeky and ask Joy Larkcom-Pollard if she had any experience with alkaline water and how to deal with it. As it happened she hadn't had a similar water issue but told me about having pH problems when growing plants against an old whitewashed wall in her greenhouse. Traditional whitewash is made from slaked lime (calcium hydroxide) which, of course, is very alkaline so watering near the wall resulted in alkaline runoff and struggling plants in the immediate vicinity, those planted further away were fine. Joy also pointed out that her garden soil was alkaline when she and her husband Don first arrived but, by adding tonnes of compost over the years, it has now probably back to neutral as compost has a mild acidifying effect. 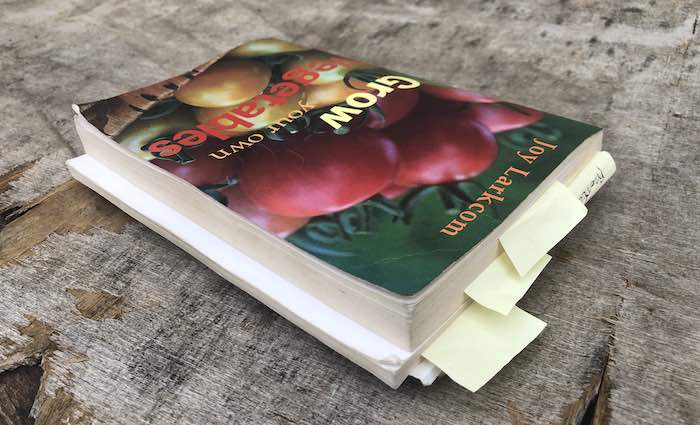 Whitewash is so rarely used these days that it seems unlikely many of you will have the same issue but it is another interesting example about how pH affects plant growth. Is is always well worth checking soil pH when starting a new garden as some plants do better than others depending on where you are on the scale; a test will give you a good indication of what will naturally grow well in your garden or if you need to correct the balance. Also, I have said it before and I will say it again, Joy's 'Grow Your Own Vegetables' is an essential book for any keen vegetable grower and one I turn to time and time again. That is my own falling apart and dog eared copy above which I wouldn't be without. I think we sell it for around €10.00 which, I would suggest, is the best tenner you will ever spend.