I spent a good bit of time in the vegetable garden this weekend as the skies were blue for a change which made working outdoors a pleasure. I was also able to have a good snoop about without getting drenched so I took the camera with me so I could show you one or two of the crops I'm growing, I hope you find the information helpful. 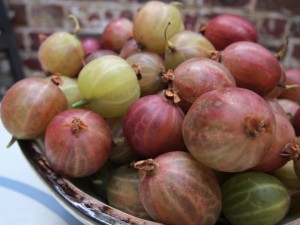 My gooseberries were getting nice and ripe so I decided to pick the lot before the birds got them. I was denied nearly all my crop of redcurrants this year due to an avian blitz which took me completely by surprise. I don't usually mind loosing a few currants to the birds but this year the word obviously got out, I am now seriously considering a walk in netted garden.

If you like the tart gooseberry taste they are a very easy crop to grow and because they are green are not attractive to birds (even the pink ones pictured survived). Once I had cleared the bushes I weeded around the base and added a small amount of well rotted manure as a feeding mulch. If you are adding manure either in March or at this time of year be sparing as a lot of young leafy growth will attract the gooseberry sawfly which can rapidly denude an entire bush.

If you wish to Summer prune your bushes (which you should only do of the bush is growing vigorously) you can cut back all new side shoots to about 4 or 5 leaves from the base main branch. 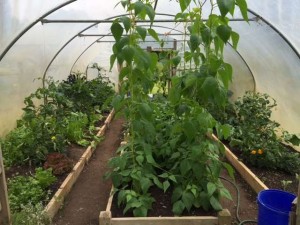 French Beans
I include a view inside the polytunnel showing some very happy French beans in the foreground which are growing up twine fixed to the crop bars above. We are often contacted by people with problems with growing French beans outside and can tell you I have completely given up in the North West as it's simply not warm enough.

French beans hate wind and low temperatures and will really struggle with our Summers but give them some protection and they grow like the clappers. It is best to harvest when they are small and tender as older beans become stringy, they produce more beans when regularly picked too so don't worry, there will be plenty more to come. 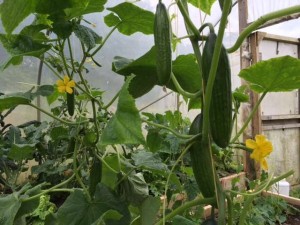 Growing Cucumbers
When I first got a polytunnel cucumbers were a big surprise for me as I found (a) they are really easy to grow and (b) they actually taste nice.

Cucumbers have a bad reputation for being tricky, it is a balancing act in the early stages to make sure their soil or compost is kept moist while also being careful not to over water and risk stem or root rot. Old varieties also have male and female flowers; you have to remove the males or they will pollinate the female and cause the fruit to become bitter. Old cultivars also produce fruit on the side shoots so need to be trained accordingly by nipping out the growing tip when the plant has reached the required size. It all sounds a bit like hard work. 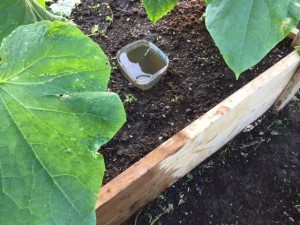 What's the answer? Grow an all female hybrid like the fabulous mini cucumber 'Passandra'. I give these plants no special attention other than a good feed of seaweed and poultry manure when planting and they literally fly up the twine.

When I say mini cucumbers, they are about half the length of a shop bought variety but twice the width and ten times as juicy. Flavour is incomparable with a delicious tart tang which is really brought out by a sprinkle of sea salt. One word of caution, you need to keep the plants evenly watered for the juiciest fruit otherwise the centers can become dry and hollow. As you see in the photo I have buried an old 5 litre water bottle (upside down with the end cut off) between the plants as a reservoir which makes it easy to water deep roots quickly. 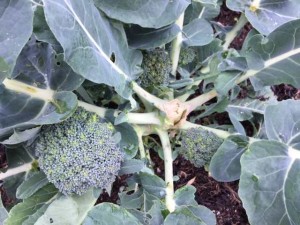 Severed Heads!
Moving outside now and a quick look at my broccoli (calabrese). You can see in the photo that after cutting the main head I left the plant in the ground where it has now produced several new heads in its place.

The second crop is often better than the first in terms of yield so well worth keeping the plant going. I usually give them a light feed of seaweed and poultry manure to give them a boost right after I cut their heads off, it seems to do the trick. 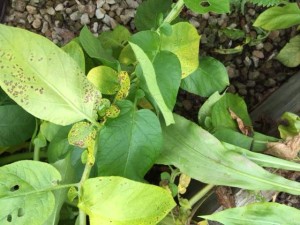 Potato Blight
As the weather has been warm and humid I have been keeping a close eye out for blight which I found, in the end, on some of my new potato leaves. Most new potato varieties will be susceptible to blight but at this time of year but it shouldn't be a big deal as they will have most of their growing done. It is important to get rid of it to avoid the tubers getting infected but also to prevent spread to your maincrop varieties (if you're growing them) as they still have significant growing to do.

Depending on how early you spot blight you can slow it down by removing any affected leaves but eventually you will have to cut all the foliage down to the bare soil. It is OK to compost leaves affected by blight but make sure you cut them rather than pull them up because blight may have reached the tiny tubers on the root where it can survive. The reason composting the foliage isn't a problem is that blight won't survive on dead plant material, the tubers are live so can carry the disease into the next season via your compost bin. 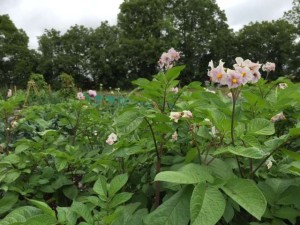 My blight resistant maincrop varieties (Sarpo Mira and Setanta) are both growing very nicely with no sign of the telltale dark patches on the leaves. Healthy potato plants look great at this time of year with their lush foliage and pretty white, pink or purple flowers. By the way, not all potatoes produce a flower and even those that do may not in some years depending on weather conditions so no need to worry if your crop fails to bloom.

If your maincrop potatoes aren't thriving you can add a feed now to help increase the yield. You want something high in potash which will feed the tubers rather than the leaves, use either a specially formulated potato feed or a tomato feed. Natural sources of potash are comfrey leaves or wood ash; I use wood ash because I burn timber in my stove but also because my soil is acid and wood ash helps raise the pH to neutral. 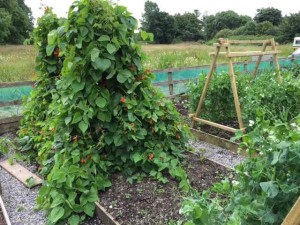 Runner Beans
You can see (or can't see) my runner bean wigwams which have now been completely obscured by the lush green growth. I'm not sure if it made much of a difference but this year I dumped a load of seaweed inside the wigwams when I planted them up; this helped smother any weeds but also feeds the soil as it rots down. Remember large earthworm populations do wonders for your plants as they mix organic matter through the soil and produce highly nutritious wormcasts (worm poo). Worms love seaweed so I basically have a little natural fertilizer factory going on right underneath my beans. 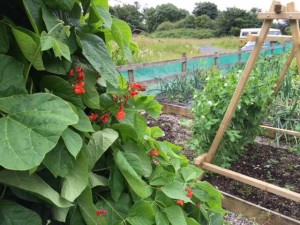 The variety I am growing is the ever reliable 'Enorma' which produces heavy yields of large pods from August to October. You can see the attractive orange flowers in the photo which will soon become delicious beans.

As with the French beans it is important to keep picking them otherwise the plant will stop producing. It has been shown that stripping all the pods from plants in early August with increase later yields by up to four times so if you enjoy beans this is worth doing. The younger beans are much more tender and tasty than older beans anyway so it's not worth growing them to full size which is when they are in danger of ripening and stopping further production. 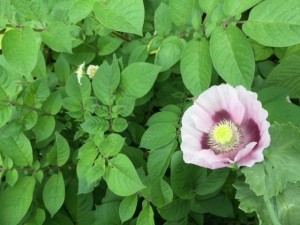 Welcome Visitors
I always mean to sow more flowers in the vegetable garden and never get round to it but this year the garden has taken matters into its own hands. I have absolutely no idea where they came from but I have beautiful pink and purple poppies (pictured in potatoes) appearing in all corners of the garden in among the other crops. I also have borage which seeded itself around the place (you do have to keep borage in control or it 'll take over) with it's beautiful bright blue flowers.

Anyway, the point is I tend to keep my garden well ordered with everything growing in it's proper place but the self seeded and haphazard poppies, borage and nasturtiums have transformed the garden into something far more beautiful than I could ever have created. I guess it's sometimes best to leave mother nature to her own devices!