I took the above photo on Friday morning on the last day of my holidays, it shows Gurteen bay in Co. Galway on another gloriously sunny day. For the first time ever the weather went my way with nearly two weeks of uninterrupted sunshine in one of the most beautiful places on Earth.

Of course long periods of sunshine also mean long periods without rain, the effects of which were apparent with brown patches of grass, fires on mountain sides and low water levels in rivers and lakes. The photo below is a secret place I am very familiar with (but will never tell you where it is), it is normally a briskly flowing river but has been reduced to a trickle due to the mountain streams that feed it virtually drying up (I know this because I climbed up the mountain to check, photo proof also included). 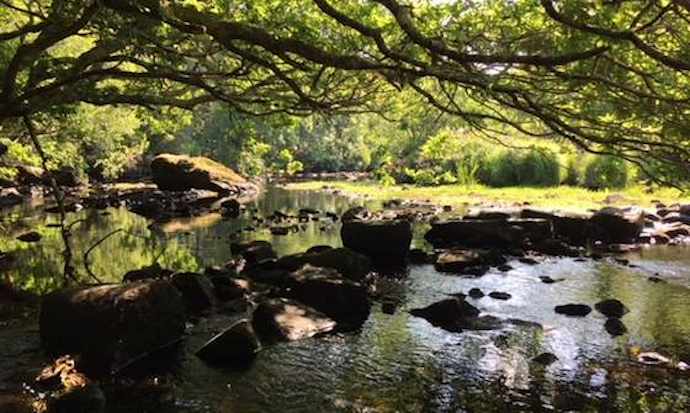 While the low water looks beautiful and enabled me easily walk up a river that would normally be impassable it is also an indicator of the low levels of water in the countries reservoirs. A hosepipe ban is now in place nationwide which puts us gardeners in a pickle as we need to water vegetable gardens. While we must adhere to the ban (you'll be fined if you don't) we can still offer some relief to thirsty plants using recycled water and helping reduce evaporation from the soil. 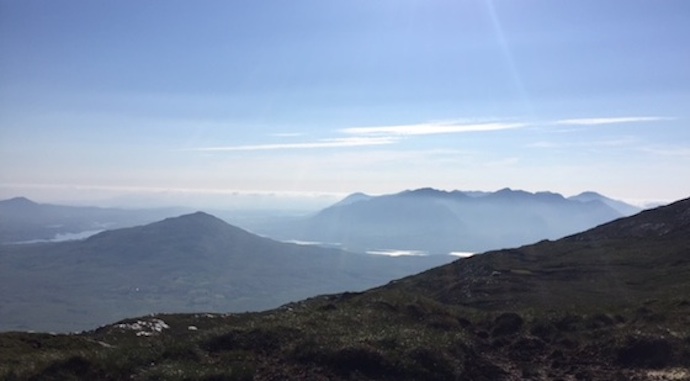 Not as bad as it looks The first thing to remember is that in the case of established plants growing in open soil things are often not as bad as they look. The surface of the soil can look very dry but there is often adequate moisture underneath especially if you are using a mulch which we will come to later. To test, poke your finger below the soil surface, if dark soil particles stick your finger there is moisture present.

You will also see large leaf plants like cabbages or cauliflowers wilting in hot weather only to recover when temperatures fall in the evening. This is because the roots can't keep up with the water demands of the leaves as water is lost through transpiration. This is more an internal plumbing limitation rather than an indication of dry soil, large brassicas are simply not suited to hot weather. If the plants perk up in the evening there is enough moisture in the soil. 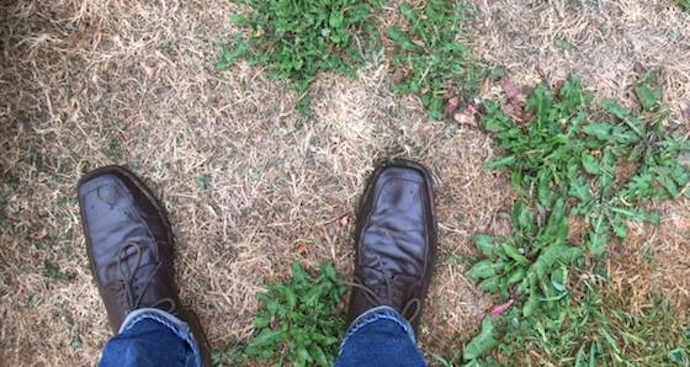 The above picture is a good example of soil moisture levels, it shows my seventeen year old shoes (square toes were all the rage back then), some parched grass and perfectly healthy dandelions. The grass obviously has a shallow root system while the dandelions with their deep tap roots are unperturbed, happily slurping up moisture from below and out competing this unfortunate patch of my lawn.

Water the soil in the evening It is more efficient to water in the evening so as little water as possible is lost through evaporation. Early morning watering at dawn is actually the very best but unless you have a timer system or sleep in the garden I can't imagine this will be done very often.

You are also better to water the soil rather than the foliage and to give a good soaking (if possible). Light watering encourages roots to grow near the surface which leaves the plant vulnerable to dry periods. As per the image above you want to encourage deep roots that can reach moisture stored at lower soil levels. 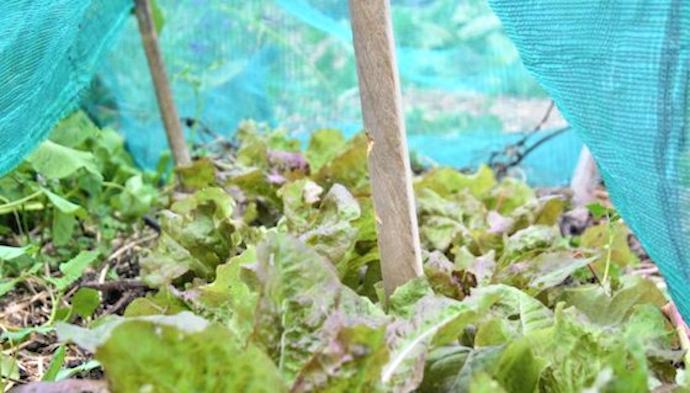 Create Shade Creating shade will reduce evaporation from the soil and reduce the amount of water the plant looses through transpiration. Greenhouses can be kept cooler by using a shade paint or shade fabric. I have been using green windbreak mesh to protect cabbages and leafy greens, just put in a few short stakes and suspend above the crop.

Mulch Mulching really is the best thing you can do for your garden, it keeps down weeds, it feeds soil and protects it from heavy rain but also reduces water loss in dry weather. Soil dries out from capillary action; as the surface dries it sucks moisture from below like a candle wick. A mulch will keep the surface cooler and prevent it drying out which slows capillary action. If you don't have a mulch material to hand hoeing the soil surface gently to break up the surface into a crumb will also help slow this action but covering really is best.

Irrigation I know I covered dripper irrigation systems the last time but I don't think I mentioned that that many local authorities allow their use during a hosepipe ban. It would be important to check locally but many have exemptions, this is what Thames Water in the UK lists as exempt from the ban: “Drip and trickle irrigation watering systems, fitted with a pressure-reducing valve and a timer, that are not handled, that place water drip by drip directly onto the soil surface or beneath the soil surface, without any run off or dispersion of water through the air using a jet or mist.”

Dripper systems use less water per square meter than irrigating with a watering can (which is allowed during a ban), especially if the drippers are covered with a layer of mulch. Naturally you need to keep watering to a minimum and at the most efficient times but with careful use you will be no more of a burden on the system than if you were using a watering can. 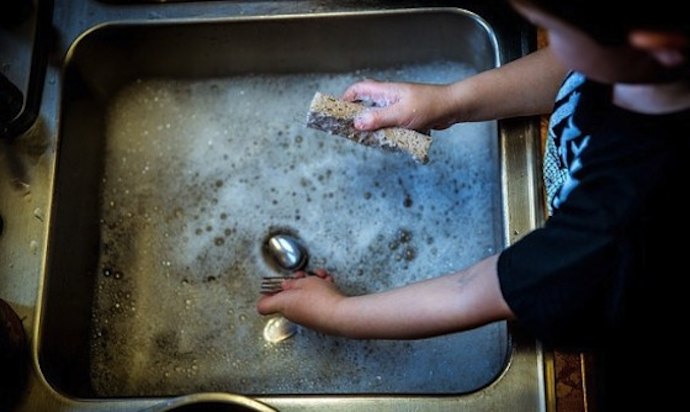 Recycling Water Water used for washing up is fine to use in the garden, the low levels of detergent in washing up liquid will not harm plants. You will also be surprised how water you can scrounge from elsewhere in the house e.g. put a bucket in the shower to catch the cold water while you are waiting for it to heat up. Small amounts of water will make a big difference to thirsty plants so every pint should be a prisoner.