I had the pleasure of a few very sweet pints of the black stuff with vegetable gardening genius Dermot Carey the other night. Growing food runs deep in Dermot's blood (as did the Guinness by the time we were finished) as he's been producing his own vegetables since he was 9 years old. We got to discussing Irish potato varieties and the work done at Oak Park in Carlow by the Irish Potato institute. I hadn't realised how influential Ireland was in potato breeding and was fascinated as Dermot explained some of the work done there. Oak park was set up in 1961 to breed a high yielding blight resistant variety for the home market. The most notable initial success was with 'Cara' which at it's peak accounted for 10% of total potato production in the U.K. and secured the future of the Oak Park institute. Dr Harry Keogh was Oak Parks most successful breeder and ranks with the great names of worldwide potato breeders. Dr Keogh and his colleagues have produced many well know varieties including Ambo, Burren, Slaney, Avondale, Red Cara and Barna for export and Cara, Orla, Setanta and the hugely popular Rooster. Irish varieties like Setanta and Orla have excellent blight resistance and makes them a very good choice for the home gardener who doesn't want to use chemicals. 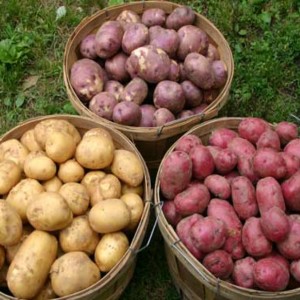 Dermot points out that we all hear so much about the Hungarian variety Sarpo Mira but are we aware that home bred 'Setanta' has equal blight resistance and for many has a far better flavour? Ireland is a leader in blight resistant varieties with Cara, Orla and Setanta so perhaps we should look a bit closer to home for the perfect homegrown spud. Dermot also tells me of a new wonder spud 'Tibet' which someone brought back from their holidays in, well, you'll never guess where.... No one knew what the variety was called so it took the name of the holiday destination. Apparently it has fantastic natural blight resistance but is a bit of an elusive customer so it's unlikely you'll get to try it. I may have to do a shady deal on a street corner to get one or two, I'll let you know. All this talk of potato breeding got me thinking on the way home about the recent controversy on GM trials being conducted by Teagsc to try to produce a more blight resistant potato. The problem is that blight becomes more and more agressive over the years with the most recent strain - Blue 13 - meaning farmers are having to spray up to 15 times in a season to control the disease. 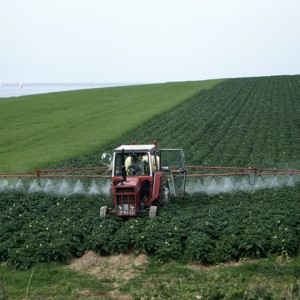 Potato breeding is crossing a variety of potato with another which has a particular quality you're looking for. This can take years and is very difficult to achieve the desired result which is what make the success at Oak Park all the more all the more impressive. The Teagsc production of Irish GM potatoes is essentially doing the same thing in a more targeted way. Instead of crossing 2 potato varieties and hoping the resulting plant has the traits you want you isolate the required gene (in this case a blight resistant one) and include it in the new variety you want to produce. Personally it feels a bit odd to fast track nature like that but I guess it raises the question: Which is better - a biological or chemical control of blight? There are valid arguments for and against which I don't pretend to be an expert on. It's an issue we'll hear much more about as the pressure on global food production increases but for the time being I'll stick to growing my own, at least I know exactly where my spuds come from!