Blueberries are high in antioxidants so widely regarded as a 'Superfruit' (whatever that is) but taking their health benefits apart they are also exceptionally tasty so well worth growing yourself. Also, given the price of shop bought blueberries I figure growing your own is the only way of having enough to make a blueberry pie without every forkful costing you a fiver. 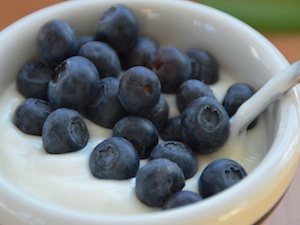 Blueberries have a slightly tart flavour but are probably best eaten fresh especially as their striking matte blue colour looks so fantastic on the plate. They are delicious used in smoothies, juices, included in a fruit salad, used in muffins or as a simple topping on yoghurt or pancakes, I think you get the idea.

Cranberries are much more tart than blueberries and are not generally eaten raw. They are used to make traditional cranberry sauce, making a very healthy juice and for cooking in various sweet and savoury dishes. 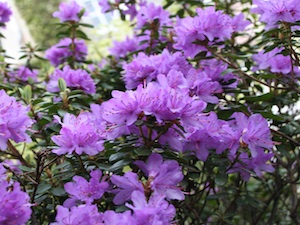 If Rhododendrons and Azaleas grow very well in your garden with no sign of leaf yellowing you should be able to plant blueberries and cranberries directly in the ground. If your soil isn't peaty and acid blueberries can also be grown very successfully in pots filled with an acid compost mix. Cranberries can be grown in pots but are better suited to special growing trenches as described below. 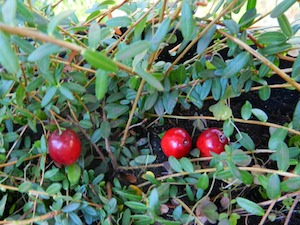 How to grow cranberries
Cranberries send out runners like strawberry plants and will colonise a bed with a mat of low growing shrubby foliage. There are two stages of growth where the plant spreads runners out in one season and then grows upright plants from these runners in the second and third years.

Flowers and fruit are produced on upright plants which is why a cranberry bed will produce a worthwhile yield while potted plants will provide only a small amount of berries. The goal when growing cranberries is to get the runners to spread and cover the allotted area in the first 2 years; this network then produces a dense mat of fruiting upright plants.

How to plant cranberries
As already mentioned if your garden soil isn't sufficiently acidic you will need to amend your site to suit. The most common method is to dig out a trench and fill with an acidic growing medium or to use a raised bed filled with the same mix.

Cranberries have a very shallow root system that only grows in the first 4-6 inches of soil so your trench only needs to be a spade depth. To get a reasonable harvest of cranberries I would recommend a planting hole of at least 4 foot square to allow the runners to spread. You can edge the bed with timber like a shallow raised bed which will keep it neat while also helping to keep encroaching weeds out.It is also a good idea to line the hole with polythene to restrict roots from spreading to the surrounding (alkaline) soil. Make plenty of holes in the base of the liner to allow drainage.

Fill the prepared planting trench with an ericaceous compost mix of 3 parts moss peat (or ericacous peat free substitute), 1 part sharp sand and 1 part aged leaf mulch. Add 3 handfuls of bonemeal to each barrow load of mix you put in. Plant in Autumn or early Spring leaving a foot each way around the plants. 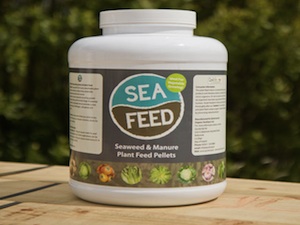 From year 3 onwards you can fertilize the plants organically using blood meal to provide nitrogen, powdered seaweed for potassium and phosphorous. An application of coffee grounds around the plants will help to provide acidity. The trick is to keep your compost mix acidic so also use rainwater rainwater for irrigation if you live in a hard water (lime in water) area as hard water will make the compost more alkaline.

Pruning Cranberries
Cranberries are very compact plants and need minimal pruning if any at all. If you berry bed is looking too crowded with runners and not producing enough uprights (or fruit) you can prune some of the long runners which will encourage upright growth.

Weeding is also important in the first couple of years to allow the runners to colonise the space. Don't let any deep root weeds get established as they will be very difficult to remove once the plants are established. 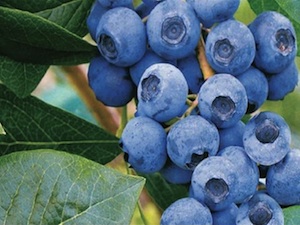 How to grow Blueberries
You will be pleased to hear that blueberries are a little easier than cranberries but the same rules apply as regards soil acidity. The difference is blueberries aren't as fussy as cranberries and if your soil pH is higher than 6.0 you can easily grow plants in large pots. It is also worth mentioning that blueberries also make a very attractive plant with pretty tubular flowers and bright red Autumnal foliage, they are also virtually pest free.

Blueberry plants will produce much higher yields if cross pollinated with a different variety so you should grow at least 2 plants; a single plant will produce a small amount of fruit but your will get bigger fruit and more of them by mixing things up a bit. Plants will tolerate partial shade but full sun is best. 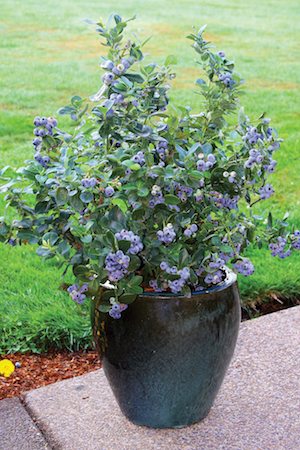 If your soil is not the required pH of 5.5 or lower you can dig out a large planting hole and fill with the same mix as for cranberries. You can also add sulphur chips to lower pH before planting (3 weeks before) and while the bushes are growing should the soil require it. If planting directly into the ground do so at a spacing of 5ft all round which is the approximate spread of the mature bush.

Personally I think as plants will grow well in pots it is the better option (if your soil is above 5.5) as you will be much more in control of the plant's environment. Use the mix mentioned above for cranberries and fill a large pot at least 18 inches in diameter. Blueberries take a few years to produce significant amounts of fruit so you are in this for the long haul, you might as well start with the largest pot you can.

Remember blueberries are used to growing on bogs and will require plenty of water to thrive. As with cranberries use collected rainwater as it is more acidic than the stuff in the taps and make sure the compost is kept moist. Also bear in mind that the waxy foliage of a decent size bush will crown the top of the pot and can act as an effective umbrella; always check compost with your finger even after rainfall. A topping of ornamental pine bark mulch will help retain moisture but also provides more acidic matter to the compost as it breaks down.

Feeding Blueberries
Feed with blood meal and powdered seaweed in early Spring, their native habitat is relatively low in nutrients so they don't like a lot of fertilizer. 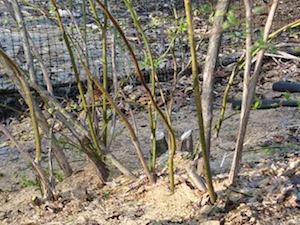 Pruning Blueberries
For the first two or three years it is not necessary to prune blueberries other than keeping the plant tidy and removing any dead wood. After three years blueberries need regular pruning to keep them productive.

In early Spring remove and dead, dying or diseased branches. Remove one or two of the oldest canes right down to the base to make way for newer fruit bearing wood. Prune any twiggy remains from the ends of fruiting branches and any outward growing low hanging branches around the base of the plant.