I think I mentioned last week that haven't been spending as much time as I should have in the vegetable garden due to the uninspiring weather we have been having lately. I had noticed on one of my brief inspection trips (when I say 'trip' it's only down the end of the garden) that there were some signs of potato blight on the leaves of my spuds and had meant to get back for a proper look and some preventative action. Anyway, it turns out the lush green foliage around the edge of the potato beds had been hiding a couple of pretty nasty clusters of the disease which had taken hold on about a quarter of my crop. We'll start out covering what I should have done to manage the situation and then move on to what I've had to do to salvage the crop which considering the photo above should feature tall, flowering potato plants was pretty drastic. 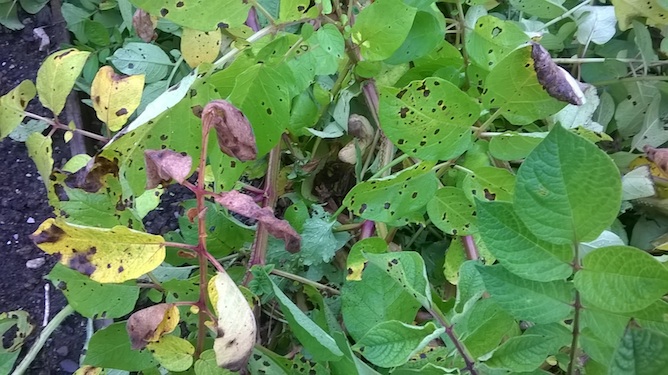 You will recognise blight on the leaves of your potato plants by their characteristic brown freckles which spread in wet weather to form larger dark brown patches. You will also notice a grey powdery mould on the underside of the leaf. The leaves will eventually turn completely brown and die off. The only Organic certified preventative measure for controlling potato blight is 'Bordeaux Mixture' which is a mix of copper sulphate, hydrated lime and water. This is no longer available to domestic gardeners and is likely to be phased out altogether due to copper build up in the soil. Your best option is to stick to growing early potatoes which are harvested before the disease hits and blight resistant maincrop varieties like the excellent 'Sarpo Mira'. Blight resistant varieties will likely succumb to blight in the end, they will just hold out for much longer allowing the potatoes more growing time. 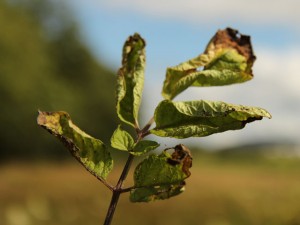 You can control blight to an extent in the early stages by removing infected leaves as soon as you see them and disposing of them well away from your potato crop. This method will significantly slow the spread of the disease in dryer years but in wet years (like this one) it is much more difficult to control. This is the bit I didn't do. By the way, the reason for blight being worse in wet weather is the spores need a film of water to spread, this is the case for blight affecting the leaves of the plant and spores washed down through the soil which infects the tubers. Infected potatoes will have brown patches on the skin and brown staining visible in the flesh when cut open. In advanced stages a secondary rot will set in reducing the once delicious spud into a foul smelling mess, once you experience the smell of a blighted potato you will not forget it. 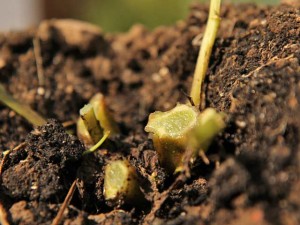 So what to do? If over 25% of your plants are badly affected you should remove all the foliage right down to soil level and get rid of it by either burying it well away from your vegetable garden or burning it. Obviously the potatoes below the ground will cease to grow but depending on when you have to take this action you can still pick a crop of reasonable sized potatoes. At the end of the day if you don't do this when you have a severe attack of blight you might not be harvesting any potatoes. 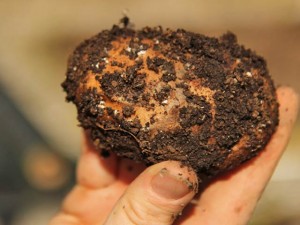 I had a bit of a rummage around in the soil when I'd cleared the stalks (which actually weren't too bad in most cases) and was horrified to find some badly rotted examples accompanied by their characteristic foul smell. The one in the picture doesn't look too bad but I can almost smell it just looking at it. Those little white dots are signs of the rot underneath, what looks a firm potato in the photo is actually a fragile skin containing a horrible mush. I was kicking myself for my sloppy gardening at this stage. So now what? Well, we're on the horns of a dilemma now. The potatoes still have a thin, papery skin like a new potato which means if I harvest them now they won't store well, this is the whole point of maincrop potatoes. Also digging them now may spread any blight spores on the soil over the tubers that I'm harvesting causing them to rot in storage. On the other hand I know I have some blighted potatoes in the ground which may infect the rest. 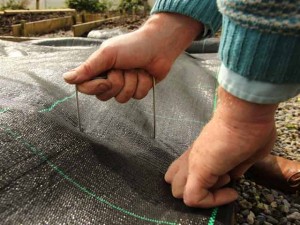 I have decided on a compromise for the purposes of experimentation. I have covered two of my four beds with mypex weed control fabric which has two purposes: 1. Some potatoes become exposed to light when left in the ground as unprotected soil is washed from the drills, this causes them to go green and poisonous. The mypex will keep out the light. 2.Blight spores are washed through the soil by heavy rain (of which we're getting plenty), I figure the mypex will protect the soil and help water from heavy showers to run off. I don't mind using the mypex as I've decided to use it later in the year anyway when I cover my beds with their annual dressing of seaweed and manure. I'll do half and half as I want to see is seaweed breaks down any quicker with a black covering. I'll harvest one of the other beds to get an idea of the extent of the tuber blight. If you are doing this you can wash the potatoes gently in a bucket of water with a little washing up liquid to rinse off any spores, dry them off and leave them in a well ventilated area to completely dry before storage. Discard any with dark brown bruising or obviously rotting examples. 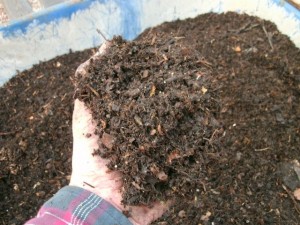 I will cover the last bed with a layer of compost as I'm clearing out my compost bins anyway, this is really just to cover any tubers that might poke out and become green. I'll let you know what happens. Potato plans for next year One thing that did occur to me in this unfortunate saga is the way I grow my potatoes is a bit daft. I move my maincrop potatoes in a 3 year rotation around the garden with a full quarter of the growing space being taken up by spuds every year. I include a little sketch below: 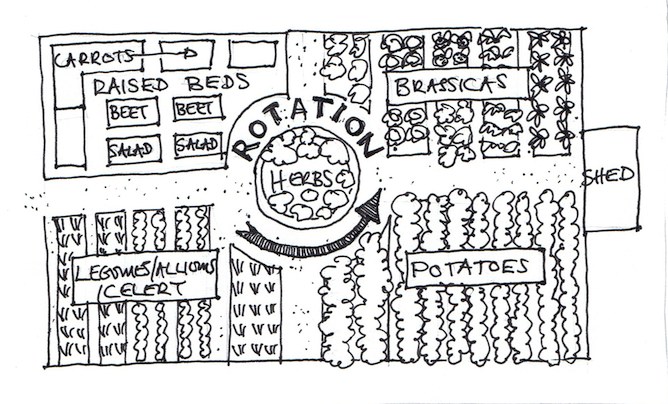 You can see I have divided my garden (apart from the raised bed part) roughly into thirds with each third divided into beds with paths running in between them. When I look at how blight spreads through my potatoes it makes me wonder why I plant them all together in one part of the garden? The only reason for doing so is it's easier to understand the rotation but with a little planning I could just as easily spread the crop around the garden. I can still have five beds of potatoes; they just don't need to be beside each other. 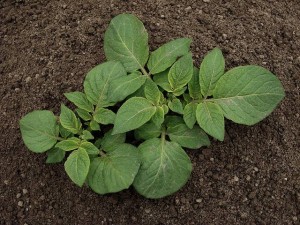 Apart from the spread of disease from plant to plant there is another advantage of spreading my spuds. Good ventilation also reduces the instance of blight; if you were lucky enough to have a very large garden and planted your potatoes in single rows spaced very far apart blight will be greatly reduced because the leaves dry quicker after rainfall. Remember we said blight spores need a film of water on the leaf to spread? For next years garden I'm going to mix 'em up. I bet you it makes a difference. P.S. I have just read in Joy Larkcom's book 'Grow Your Own Vegetables' (which I need to learn by heart, it is so good) that I should be using a 5 year rotation if possible to help guard against eelworm so I'm going to need Stephen Hawking to help draw up next years plan.