Apart from clearing the garden and adding manure of compost to your soil, planting potatoes is the first proper thing you can do in the vegetable garden. In Ireland early potatoes are traditionally planted on St.Patrick's day while in the rest of Europe it is the Spring equinox (yesterday as it happens) that signals the time to put early potatoes in the ground. The cold weather is starting to move off now so for many of you this weekend will be the perfect time to put in your spuds and kick off the growing year. 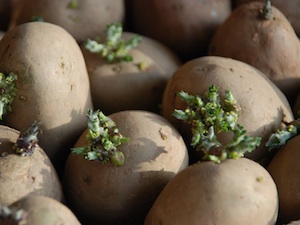 Potato categories Early, second early and maincrop varieties are categorised according to how long they take to mature. As long as it is warm enough you can plant all categories, staged planting is more about when you want to harvest the crop than when you can put them in.

I like to get my maincrop varieties in early as I don't spray for blight so know I will be removing all the potato foliage when the disease hits in late Summer. Removing the above ground plant stops blight reaching the tubers (as long as you don't leave it too late) but also stops the growth of your potatoes. I figure the more growth I can get done before this happens the better.

The downside is that they will also be ready early and will sprout in storage if the weather is still warm. I leave them in the ground until October so I can harvest them in cool weather but this does leave them open to slug attacks. There is never a perfect solution in gardening! Anyway, here's the planting to picking times for the different potato types: 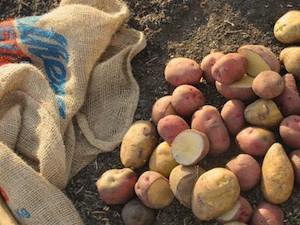 Which type of potato to choose? As shown above the different potato types are categorised by the time they take to mature but there is also a size difference both in the plant and the potato.

If you have a small garden you are better off growing early varieties because they will take up less room. Also, because they are ready from late Spring, you can use the bed again for follow on crop of another vegetable. Earlies also have the advantage of being ready before blight becomes a problem in the mid to late Summer so if you want to avoid spraying they are a good choice.

First and Second earlies produce smaller potatoes but what they lack in size is made up for in flavour. Earlies are dug and eaten as you need them so have the best fresh potato taste, you will never experience this from shop bought varieties. The fresh flavour is most apparent in first earlies, my favourite is 'Red Duke of York' which is floury yet firm with a delicious flavour. 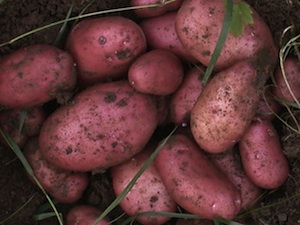 Maincrop varieties have a higher yield and produce much larger potatoes. They are more suited to large gardens as they will need their growing space for the full season. While thin skinned earlies are not suited for storage, maincrop potatoes have a thicker skin and will keep all Winter. It is not always the case but as a rule of thumb early potatoes tend to be more waxy while maincrops tend to be more floury.

If you would like to learn more about growing potatoes have a look at our potato video below of click the blue button to view our potato blog articles. 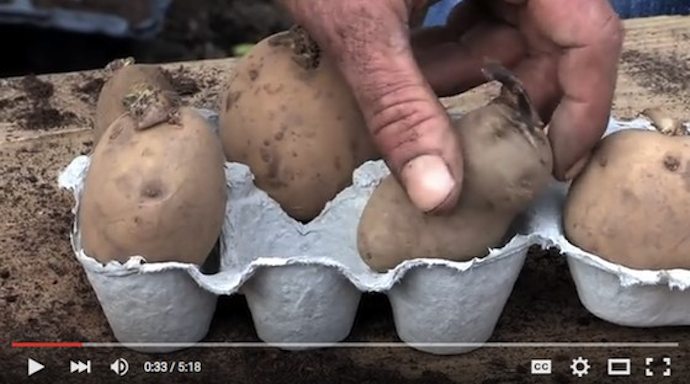