Following on from last week's post I thought we would continue with more planting tips, this time on tomatoes as I put some in my tunnel at the weekend. As regards flavour, there is no comparison between homegrown tomatoes and the things they sell in the shops. The variety in the header image is 'Sungold' which everyone knows about these days but remains an absolute taste sensation. 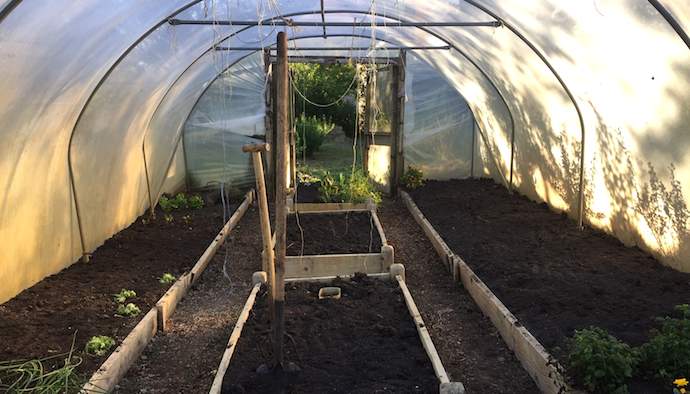 Having spent an evening last week clearing out my polytunnel I was ready to go on Saturday morning as shown in the photo above. You can see the shadows of my gooseberries silhouetted on the tunnel wall as the early morning sunshine streams in (I think it was around 7.30, aren't I great?). As far as preparation goes, I cleared out a load of Winter salads and weeded the ground before adding a layer of well rotted manure mixed with garden compost (actually I didn't have any compost left so used Envirogrind). The soil had been watered over the Winter so was reasonably moist but in many tunnels (mine last year) it can be bone dry at planting time. 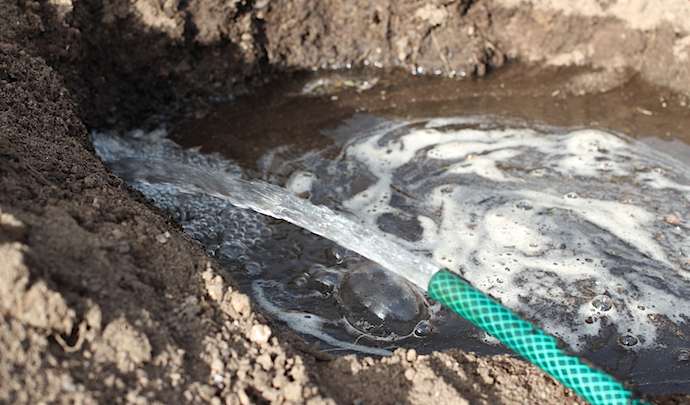 If your tunnel or greenhouse has dried out over the Winter the only way to properly irrigate the soil is by digging large holes and filling them with water. As the water drains, keep filling until they hold water at which point the soil is saturated. Watering the surface will look fine but when you come to plant you will find only the top inch or two holds any moisture. If there is one thing freshly planted seedlings need it is water so this step is very important. While you have the hose out give the plastic a good scrub, inside and out. My tunnel plastic is probably in it's last year and has got a bit opaque so I need to get it as clean as possible. I also like to use 'Citrox' natural disinfectant which will help control any fungal problems in the tunnel, I have included the product below. 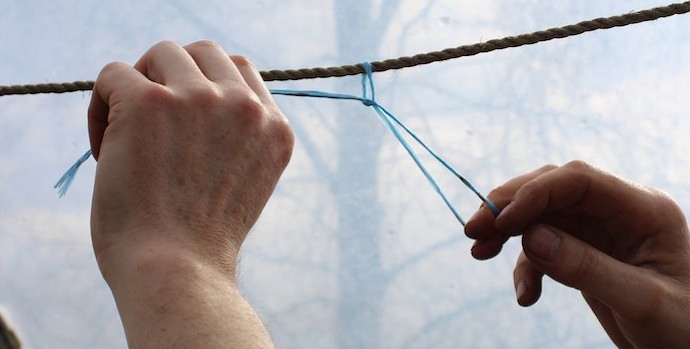 Slip Knots Unless you are growing bush tomatoes or trailing types in a hanging basket your tomatoes will need support from above. I have ropes running the length of my tunnel which I can attach twine to for supporting any climbing plants. You might think I should be using some natural jute string instead of the blue twine in the picture but unfortunately it tends to rot in the humid atmosphere of the tunnel and will break under the weight of laden tomato vines. The plan is to tie a slip knot (it's easy but I'm not going to attempt to describe it in words, you can google it) to your support and then bury the other end below your tomato plant. The slip knot is so you can adjust the tension on the twine as the tomato grows otherwise it can cut into the stem. Leave a decent tail on the knot for this reason and allow some extra on the other end to bury under the plant. 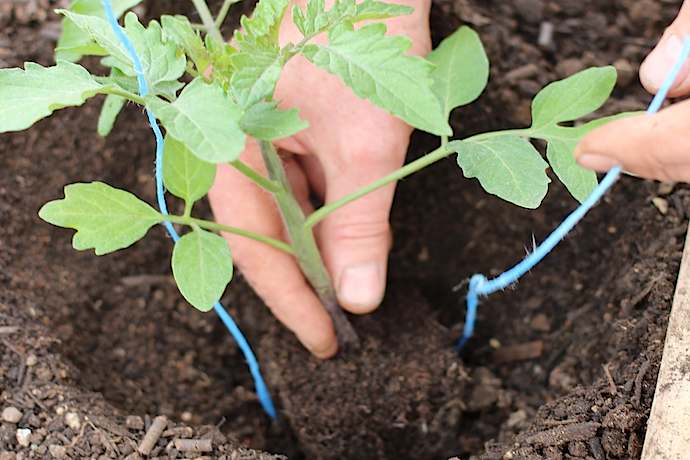 Planting Depth It can often be the case that tomato plants get a bit leggy due to being started off early in the season when light levels were low. Luckily tomatoes help us rectify this as you can plant them deep and cover up the first portion of the stem which will start to produce roots. It is recommended to bury the stem up to the first set of leaves pictured above my thumb in the picture. I often use up lanky and miserable looking specimens (that weren't good enough to sell) and bury half the plant as any part of a tomato stem will produce roots if covered with soil; they look a bit miserable at first but will recover to become productive plants. 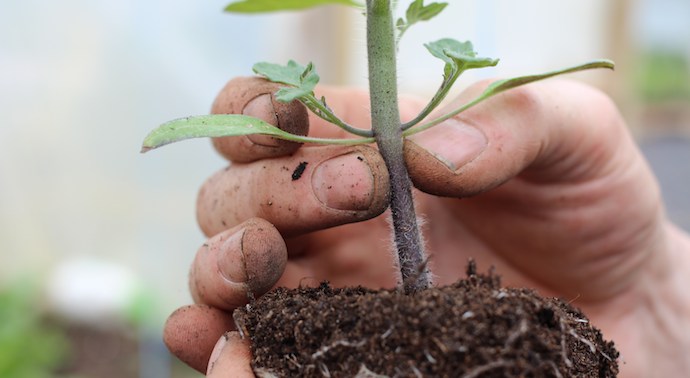 BTW, this is not the same for cucumbers! I also planted cucumbers at the weekend so thought it worth mentioning that cucumbers are the complete opposite in terms of planting. It is the hairs on the tomato stem that form roots if covered and as a cucumbers also have a rough/hairy texture you might think the same method applies. Cucumbers don't share this rooting trait and are, in fact, very susceptible to rot if any part of the stem is covered. If you are planting seedlings leave the root plug sitting very slightly above the finished soil level. Plant Feed As I said I had already spread a layer of well rotted manure and Envirogrind so the soil is well fed but I also mix in a generous handful of Seafeed (seaweed and poultry manure) in around the planting holes. As per mail last week, work the feed into a wide circle around the hole and keep it shallow as that is where the feeding roots will be. Remember we are expecting an awful lot from a tomato pant which is drawing from a relatively small area of soil so a good supply of slow release nutrients will pay dividends. 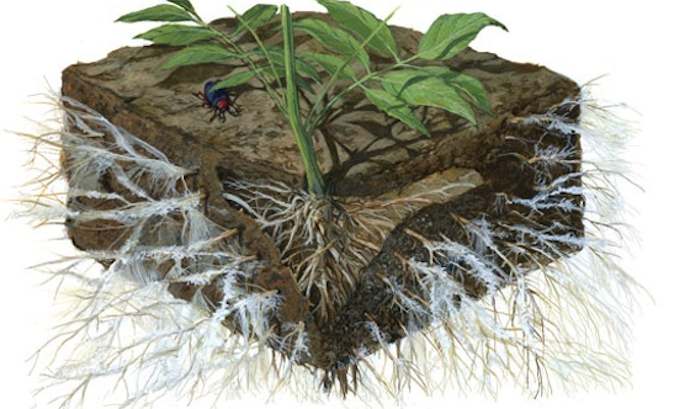 Mycorrhizal Fungi - Mycorrhizal fungi are naturally occurring fungi that assist plant roots by delivering nutrients in return for sugars provided by the plant. If your polytunnel or greenhouse soil has dried out over the Winter it is a good idea to replenish these networks. I have included a handy 'biscuit' product below which can be used at planting time or buried beside existing plant roots. Be firm! Again, we mentioned this last week but make sure you firm the soil in well around the root ball. Large air pockets left around the roots will make it difficult for the plant to draw up moisture and, as we've said, transplanted seedlings need plenty of water. Firm the soil by pushing in from around the root as you fill the hole. String 'em up! At this stage you're nearly done, all that is left is to gently coil the plant around the twine. If the twine feels a bit taut and is in danger of harming the stem you can go back to your slip knot and slacken it off a little. 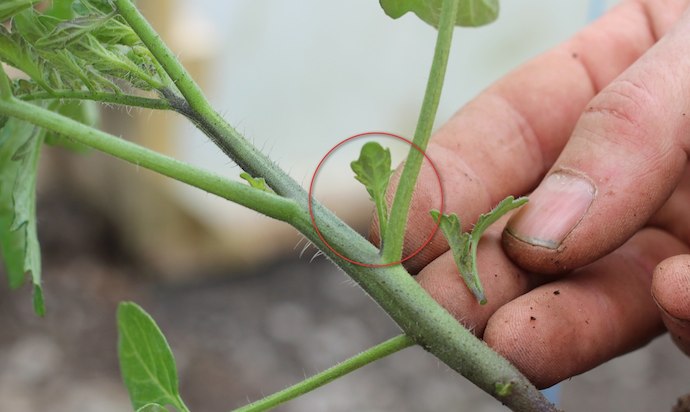 Nipping out side shoots Of course tomatoes grown on a support are trained to provide as much fruit as possible. If left to it's own devices the plant would be sprawled all over the ground sending new vines off in whatever direction it felt like. The problem is (apart from being unruly) the more vines the plant grows, the less fruit it produces. To limit the plant to a single vine we need to pinch out the side shoots as it grows, chances are you already have some on your seedlings. The side shoots grow from the junction of a leaf and the main stem. It is best to keep a close eye on them and nip them off when they are small and tender but they can also be removed if they have begun to grow a vine. To remove young shoots simply snap them off, more mature shoots should be cut with your secateurs as if they don't break cleanly the damaged area will be an entry point for disease. As usual I have assembled some relevant (and irrelevant) products below for your viewing pleasure. If you have any suggestions/requests for next week's article let me know. I'm thinking of installing an irrigation system in the tunnel and make a video if anyone's interested? That's it for now, I'll see you next week!