This week I am taking a break from vegetable growing as I have been working on some new flowering perennial planting plans both for the site and for my back garden. The idea behind our flowering plant packs is to group perennial flowers, grasses or ferns together in mixes that work well together and give interest through as much of the season as possible

To keep things simple, I have arranged the plans in 4ft x 6ft or 4ft x 12ft blocks and provided both a photo representation of the planting scheme as well as a scale grid planting plan with the planting locations. Of course, not everyone has 6ft or 12ft rectangular beds so, using my back garden as an example, we will be looking at using the plans to fill different shape beds. The overall point is that our planting plans are not set in stone, they are designed to give a complimentary mix of colours and shapes but the plants can be moved about to suit any space. Our planting plans are relatively densely planted so they fill out quickly but they can be stretched with wider spacings; the same effect will be achieved, it will just take a little longer.

Towards the end of last year, we did a bit of a makeover on the concrete yard at the back of my house and added a patio area and and some beds of different heights and shapes. The general idea was to break up what was an angular space and introduce some curved lines to make it a bit more interesting to look at. The next part of the plan will be to continue the curves through to the adjoining lawn (in the photo further down the page) by creating new beds and planting, I will include this if anyone's interested when I get to do it next month.

As we finished the building work last autumn, I didn't get a chance to plant up apart from adding a selection of tulip bulbs which my wife planted in the Autumn. The back of the house faces South West and is very sheltered, it gets good heat in the summer time which gives me plenty of options for flowers and grasses. 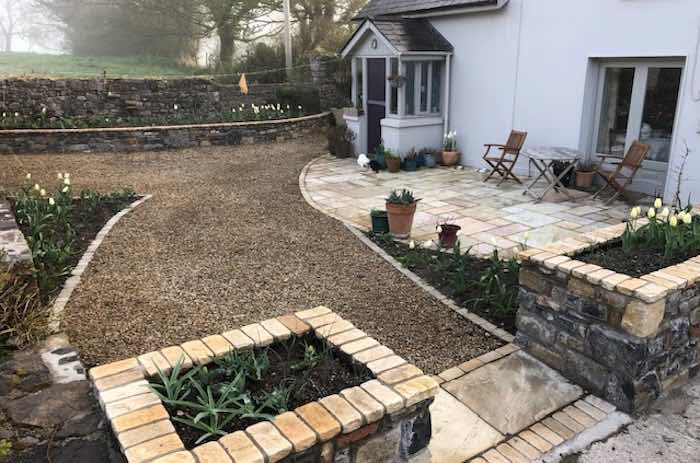 The beds have been filled with an unscreened soil of reasonable quality so, as flowering plants don't need the levels of fertility that vegetables do, I won't be adding any extra nutrients at this stage. As with all our planting plans, the focus will be on creating a natural looking, bio diverse garden so I will have plenty of pollinator friendly flowers as well as grasses and ferns in the shady areas to provide as much habitat as possible.

I am not sure how informative the illustration below is because you can't see that much is but basically I have used just two of our planting plans, one for the raised bed along the back wall and the other for the ground level beds either side of the path. 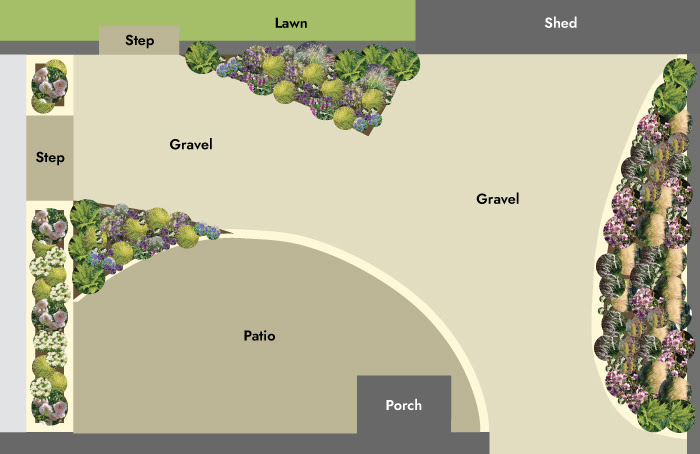 Repetition
Although you might think it will look too orderly, it is better to repeat a relatively short list of plants to create a natural look rather than adding too many different shapes and colors. If you think about it, you are more likely to see large drifts of the same plant in the wild rather than a load of individual specimens so the same rule should apply to your garden. The repetition rule is followed in our plans anyway but I have also resisted the temptation to use any more than 2 schemes and will do very little adding or tweaking when I am planting out.

The two plans I am using are the new 'Meadows Edge' 4ft x 12ft plan shown further up the page and the 4ft x 6ft 'Whimsical & Wild' pack shown below. I have used 2 x packs of the Meadow scheme and 3 x packs of the Whimsical collection to fill an area of approx 22 square metres. Obviously I will be moving the plants around to suit the shape of the beds but, as I said, planting distances are not as important as they are with vegetables, the grid plans are only intended as a rough guide. 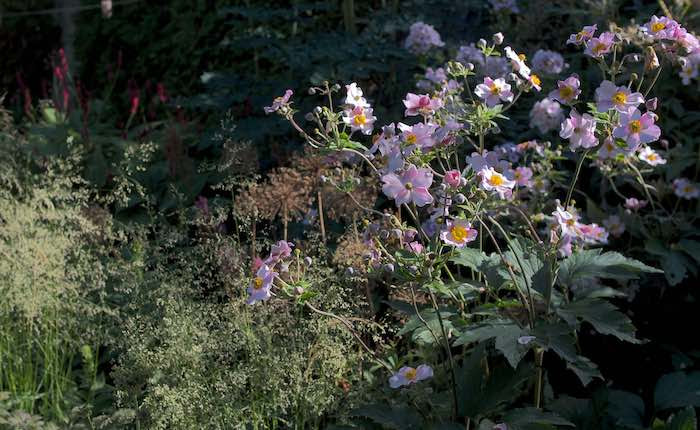 The plan is understated and wild with a summer prairie feel. The mix includes delicate foliage and yellow flowers of Foeniculum Vulgare Purpureum married with the pretty white flowers of Astrantia maj. 'Large White’. Later in the season the pinks of Anemone hyb. Koingin Charlotte’ contrast with the hessian and oatmeal colours of Deschampsia cespitosa Goldtau which also provides a backdrop for the tall, bottlebrush flowers of Actaea simplex Black Negligee. 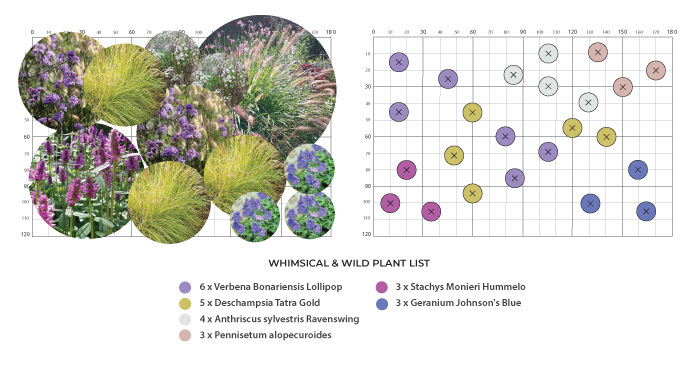 The pack contains a mix of blues, purples and pinks set against a backdrop of bright green and soft taupe tones. Pretty white Anthriscus sylvestris 'Ravenswing' and blue Geranium 'Johnston's blue' come into flower in May followed by airy purple Verbena bonariensis 'Lollipop' and magenta/purple Stachys Monieri 'Hummelo'. The balanced colour palette is set off by the two grasses; Deschampsia 'Tatra gold' and Pennisetum alopecuriodes to create a beautiful 'whimsical and wild' display. 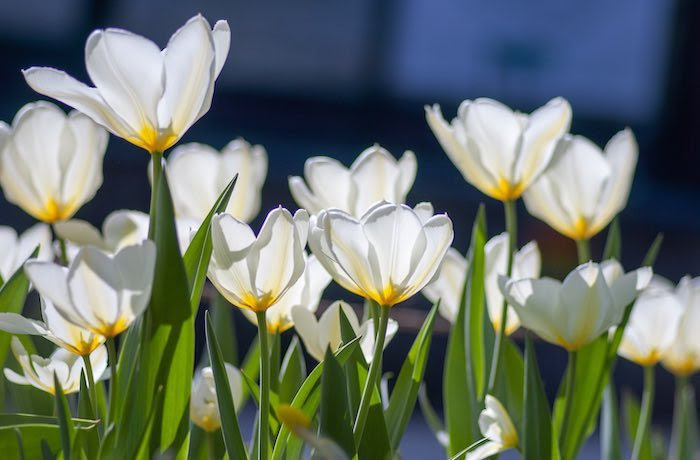 Adding bulbs
We can't include flower bulbs as part for the perennial plant pack because bulbs are only supplied in the Autumn while perennials can be planted nearly all year round. I would recommend adding bulbs to any planting scheme as the garden starts to flower earlier, usually from late March to early April, whereas, if you have perennials only, you will need to wait until May for the first blooms.

In my case, we have already added white tulips ('Spring green' as far as I remember) and some alliums but since most tulips decline after their first year of blooming, I will top them up as the garden matures. if you are going for a natural look, I would avoid too many tulip colours, maybe stick to a maximum of 3 and plant in decent size clumps. 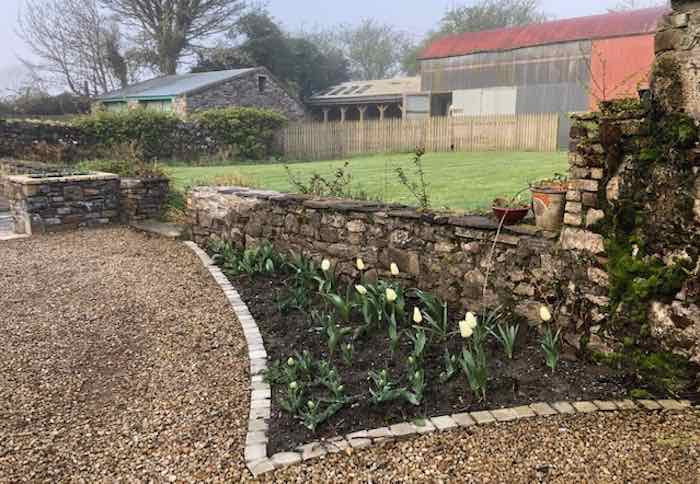 The image above shows the aforementioned lawn area where the curved bed on the bed in the foreground will flip around to the right and swoop off around the wall and fence in the background (which is curved). I will write up an article when I am planting out in the next couple of weeks where we can go into the choices in more detail as well as a few minor changes like adding in some ferns in the shaded areas.

The point today, I suppose, is that if you are planning on some new flowering perennial beds this season, our plans take a lot of the guess work out of it. I often find figuring out what to do is the hardest part of a project but once I have a plan, the job itself is plain sailing.

That's it for today, see you all next week! 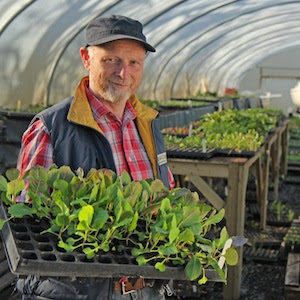